The grand opening of Apple's new Shanghai store drew large crowds numbering in the thousands, according to a Macenstein reader.

I got there at 7am. There were already hundreds of people waiting in line. By the time at 11:30am, there were thousands of people in the queue! And lots of reporters on the site. It’s pretty hot day, store workers were giving out free water to the waiting customers. A few lucky people got apple logo umbrella. I am one of them. :) These umbrella’s body are made form fiberglass! Pretty cool stuff. I wish they could make some limited edition fiberglass back iPhone 4. The first 5000 customers also get a free T-shirt. I got one, haha!

The store is huge! I think it’s bigger than the one in New York. By the way, there is a guy and his wife (or girlfriend) camped at the store 2 days before the opening. He is the first customer got into the store. There is a photo of him in the set (he is the guy with the Steve Jobs’ flag in one of the photos). 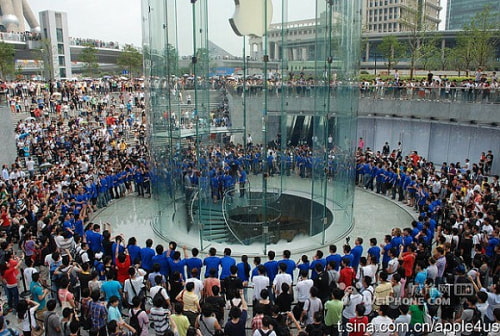 Me - July 10, 2010 at 4:13pm
\"Today in Shanghai, the roof of the newly opened Apple Store caved in on itself due to the overwhelming amount of people that attended the grand opening.\"
Reply · Like · Mark as Spam
Recent