Geohot has released his Limera1n jailbreak for iOS devices. We will be posting tutorials on how to use it shortly. Currently, it is Windows only.

Remember if you require an unlock do not upgrade to iOS 4.1, you will need to wait for the next PwnageTool release. The only exception is the iPhone 4 which could be upgraded to iOS 4.1 without updating the baseband.

Keep checking back for our tutorials which will be posted momentarily.

Update:
According to MuscleNerd: "SHAtter will be held back now, so it's not the worst possible scenario. Who knows, maybe SHAtter can even be improved."

Update x2:
The third version of Limera1n is out now. It fixes a bug with the iPhone 3GS on the new bootrom. 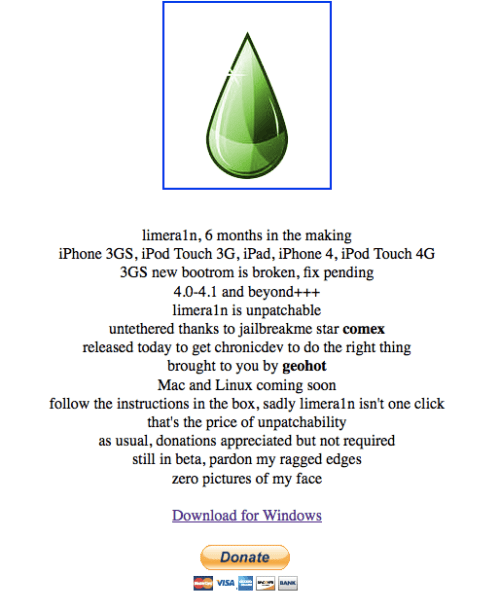 G_Sauce - October 14, 2010 at 1:58am
I have an iPhone 4 running iOS 4.1 unlocked for tmobile. After I jailbroke with limerain I lost my facetime. I tried facebreak and 3G unrestricter and no luck. FaceTime was working for me when I had iOS 4.0.1 but not anymore. Anyone have any ideas how to fix. This??
Reply · Like · Mark as Spam

kikikuku - October 13, 2010 at 8:17pm
Ip 4, out-of-box, 4.0.2 - BB 01.59.00 successfully JB by limera1n, and unlocked by using ultrasn0w. SHSH was saved by using TinyUmbrella Future plan: will wait for PW to be released will use Tinyumbrella to update 4.1 without changing BB will use PW to jailbreak again, then ultrasn0w to unlock. <-- does this look okey ? Thank you for all the hard work.
Reply · Like · Mark as Spam