A benchmark test designed to compare graphics rendering systems in different operating systems has found that Mac OS X performs, on average, at about half the speed of Windows XP.

Sean Christmann, a developer at user interface design firm EffectiveUI, said his GUIMark test was developed to give designers and developers an indication of which technologies can draw complex interfaces at a smooth rate of motion.

Christmann ran the tests on a Macbook Pro with an Intel Core 2 Duo processor running at 2.33 GHz, and with Windows running in a Boot Camp partition.

Findings
I’ve been surprised with the results so far between WinXP and OS X. On the same machine its very clear which vendors take more advantage of the underlying hardware. The results for the different plugin technologies aren’t too surprising since it’s regularly admitted that most companies spend their optimization time on Windows due to its larger install base. This argument doesn’t hold any water though when comparing html rendering on Safari/Mac against IE /Windows where there’s roughly a 1.6 : 1 advantage to the IE team. I can’t help but wonder if the core apis on the Mac platform are creating any unnecessary roadblocks. I’m also extremely surprised at the rendering speed that Flash is able to pull off on Windows. I developed this benchmark under OS X and after compiling the results I’m considered making the testcase more intensive since Flash is running so fast, but for now maybe the really poor Mac performance will give Adobe something to work on. 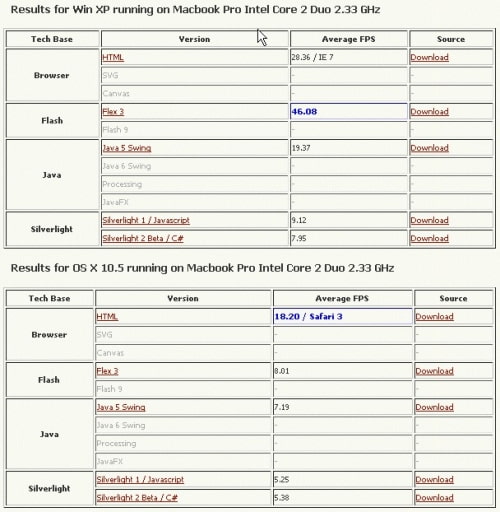