Microsoft has filed an opposition to Apple's attempt to trademark the term 'App Store' arguing that it is a generic term commonly used in the public domain.

"App store" is a generic name that Apple should not be permitted to usurp for its exclusive use. Competitors should be free to use "app store" to identify their own stores and the services offered in connection with those stores. Microsoft’s motion for summary judgment should be granted and Apple’s application to register APP STORE refused.

After an initial overview of Apple's application, the Trademark Office refused registration of the mark APP STORE on the basis that it was merely descriptive of the services rendered. Apple then tried to claim that 'app' was a shortform for 'Apple'. This didn't fly either and was also rejected. Finally, Apple admitted 'app' was descriptive but said it should get the registration because the public would recognize APP STORE as belonging to Apple (and only Apple) because of the extraordinary success of the iTunes App Store, its extensive marketing and promotion of the APP STORE mark, and the unsolicited media coverage of Apple’s services. 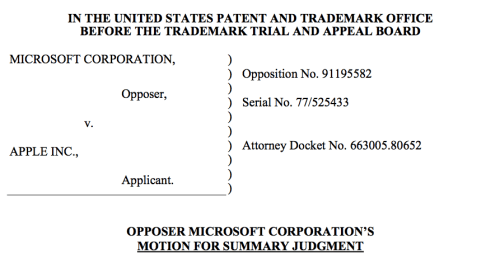