Analyst Ming-Chi Kuo of Concord Securities reports that the iPad 2 will gain a thinner, anti-reflective display rather than a higher resolution one, according to AppleInsider.

"The improvement of iPad 2 display," the report notes, "focuses on thickness and anti-reflection, not resolution. iPad 2 display module is 30~35% thinner than iPad 1 and it's helpful for better form factor.

Thanks to anti-reflection, iPad 2 could have better sunlight readable experience and it's helpful for Apple to compete with Amazon's fast growing Kindle business.

The most important reason why iPad 2 won't have retinal display is yield rate of panel making. At this point, making high resolution and bright IPS/FFS panel is not easy and the production volume and cost couldn't meet Apple's requirements."

The report also notes that the iPad will get a dual core processor and SGX543 graphics.

"iPad 2 will use [ARM] Cortex-A9 dual core processor running at 1.2GHz. Increasing 1~2% single core processor clock results in a 3~5% power increase and dual core could get a better balance between computing power and power consumption. That's the reason why Apple will use dual core for iPad 2."

"iPad 2 will also have a GPU using Imagination's SGX543 dual core graphics technology which is 200~300% powerful than iPhone 4."

Finally the report confirms that the iPad 2 will get two cameras and suggests a SD Card slot may be possible.

The iPad 2 is said to be heading to market in late 1Q'11 or early 2Q'11 based on supply chain shipment status. 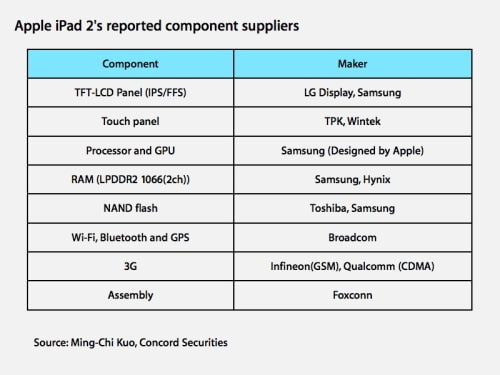