Bootcamp no longer offers support for Windows XP and Vista on the new MacBooks just released last week, according to ZDNet.

Note: Windows XP and Vista drivers are not supplied for these computers and are not supported. 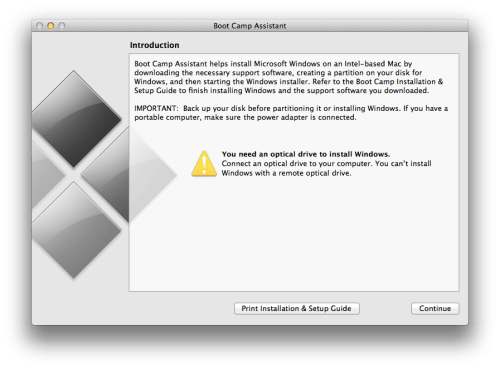 teraflow - February 27, 2011 at 3:15pm
To anyone complaining about this: think for a moment, Apple sells its own computers (MacBooks, iMac...) and they sell it with Mac OS, which is their own OS. If they have to make drivers to every goddamn OS in order to support running them, they are losing millions of $$$, plus XP an Vista are discontinued. If you need Windows, buy a laptop.
Reply · Like · Mark as Spam

Neerav Kothari - February 28, 2011 at 12:35am
they earn many millions more simply because macs can also run windows. thats whats make mac usable everywhere, even at work. if they were to only loose rather than gain, they wouldn\'t support windows at the first place. if my MacBook were incapable of running windows, i would had never bought it. u can practically do without os x, but not without windows simply because of every other machine out there (95%) is a windows machine. Am an Apple fanatic too. but reality is reality. Neerav PS: i think the new macbooks can\'t run vista and xp cause MS must not have licensed Apple to support it anymore. I\'m sure people will find a work around.
Reply · Like · Mark as Spam

? - February 28, 2011 at 5:32am
Thick fanboi, \" If they have to make drivers to every goddamn OS\" - every OS!, the discussion is about support for two massively subscribed OS\'s. It impacts many people, financially as well as functionaly. There are many of us out here who rely on interoperability between systems to carry out our daily business and not bleat on about how Apple\'s way should be the only way, I like Apple products as well as Windows products, but I base my decisions on what the system can provide for me and not how shiny or cool it is or who made it....... now go back to pleasuring yourself over a Mac magazine
Reply · Like · Mark as Spam

teraflow - February 28, 2011 at 6:14am
Again: XP and Vista are discontinued, which means they will not be updated anymore and no one will give support for them. This means Apple will not only have to make the drivers, but also will have to deal with problem, issues and more, when it\'s a Microsoft problem.
Reply · Like · Mark as Spam
6 More Comments
Recent