Apple is suing Amazon to stop them from using the words 'App Store', a term which they claim ownership of, according to a Bloomberg report.

Apple, in a complaint filed March 18 in California, accused Amazon.com of trademark infringement and unfair competition and asked for a court order to prevent the company from using the "App Store" name, as well as for unspecified damages.

Apple has attempted to trademark the term 'App Store' three times. The first two times their application was rejected due to its descriptive nature. Apple even tried to argue that App was short for 'Apple'. The third time and 400 exhibits later the application was allowed and immediately opposed by Microsoft.

"We've asked Amazon not to copy the App Store name because it will confuse and mislead customers," said Kristin Huguet, a spokeswoman for Apple. The case is Apple Inc. v. Amazon.com Inc. (AMZN), 11-1327, U.S. District Court, Northern District of California.

Let us know what you think of this in the comments. Should Apple be allowed to trademark a term so descriptive in nature? 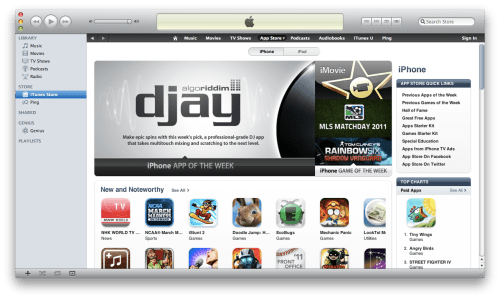 Tjp - March 21, 2011 at 8:29pm
Apple essentially created the term App in the public eye. It widely became popular and somewhat replaced \"Applet\" as a mobile application referent. Apple should be allowed to protect \"App Store\" as they created the momentum to use the word and there is a required distinctness to it. The attempts these last few years to dilute its specificity have been because Apple specifically tried to protect it. Look at what happened when Apple bought a domain with \"Slate\" in it. Immediately at the next electronics shows before Apple announced iPad _everyone_ was talking about their upcoming \"slate\" devices. Tablet was gone from the vocabulary for a season. The attempt was to pre-dilute the supposed Apple mark for their tablet-ish device. Epic fail as Apple came out with iPad. Apple promotes branding as the App Store (tm) and the same thing happens.
Reply · Like · Mark as Spam

ad - March 21, 2011 at 9:29pm
WTF are talking read over the complain apple filed. 1st times.. Apple intented to tm app as short term of apple. who the hell in this world call apple in short term is app. will you go to the store get 3 lbs of app instead of apple what dump fark apple fan.. get lost slut
Reply · Like · Mark as Spam

WTF2 - March 23, 2011 at 6:17am
You retard, the word \"app\" has been in use for years as an abbreviation. Take your blinkers off and look outside of the Apple world you smack head
Reply · Like · Mark as Spam

Sd - March 21, 2011 at 8:20pm
Can we go to suppermarket ask sale associate \"can you tell me where is your app short term of APPLE\" and can we ask them help us to get 3 bags of app? This would be funny how apple want to claim some thing in generic as their own name... Lol apple = app then app = application.. Should apple own these tow words too then I\'ll own app= apply
Reply · Like · Mark as Spam
15 More Comments
Recent