Due to the intense demand placed on Apples iTunes Activation Server, it is experiencing significant down time today.

Having been one of the first in line to personally purchase an iPhone it was apparent that staff could not connect to the iTunes server to perform activations. Preferring to activate at home I left the store 45 minutes later. Not one phone had been activated yet at that time.

Gizmodo has posted a screenshot (see below) of the "iPhone activations are not available at this time" message.

AT&T has said, "We have had reports that customers attempting to download new iTunes 7.7 software to their new iPhone may get an error message saying "page not found." We have reported this issue to Apple. While Apple works to resolve this issue, we are asking customers to sync their newly activated phone later at home."

We will be posting a tutorial shortly on how to do iTunes activation from home... 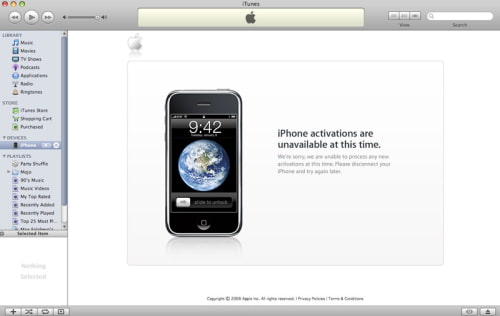