Apple may be planning to implement WiTricity Wireless Charging for future generation iPhones, according to a MacRumors report.

WiTricity is based on the research from MIT's labs where scientists showed a new method for transferring larger amounts of power wirelessly over more practical distances (up to a couple of meters) than traditional induction.

"The magnetic fields of two properly designed devices with closely matched resonant frequencies can couple into a single continuous magnetic field. Prof. Soljačić's team showed how to use this phenomenon to enable the transfer of power from one device to the other at high efficiency and over a distance range that is useful for real-world applications. "

Earlier this month the Wall Street Journal reported that Apple was experimenting with "a new way of charging" the 2012 iPhone. MacRumors has since uncovered a patent filing called "Wireless power utilization in a local computing environment." Published in May of this year the patent specifically details the same resonance technology and refers to the original paper published by the MIT researchers.

In the patent Apple gives the example of an iMac being the source of resonance power creating a charging field of about one meter in-front of the computer. Apple says, "by doing away with clumsy and annoying cables and eliminating the need to replace batteries, an easy to use and efficient local computing environment can be provided to the user."

Although exciting, it seems unlikely that the next iPhone will incorporate this technology. It would have to be built into iMacs and MacBooks as well, and teardowns of Apple's new PCs have found nothing abnormal. However, this definitely sounds like the type of ground breaking technology Apple loves to bring to market. Hopefully wireless charging will make its way to our devices soon. 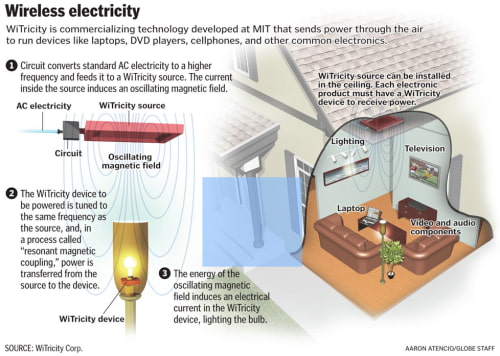 Eric - July 12, 2011 at 10:30am
I wonder what ramifications this type of magnetic field will have after prolonged exposure.
Reply · Like · Mark as Spam
0