In a letter to editor of the New York Times, Bono the lead singer of U2, defends Steve Jobs against criticism over his lack of public giving.

Despite accumulating an estimated $8.3 billion fortune through his holdings in Apple and a 7.4 percent stake in Disney (through the sale of Pixar), there is no public record of Mr. Jobs giving money to charity. He is not a member of the Giving Pledge, the organization founded by Warren E. Buffett and Bill Gates to persuade the nation's wealthiest families to pledge to give away at least half their fortunes. (He declined to participate, according to people briefed on the matter.) Nor is there a hospital wing or an academic building with his name on it.

The article does acknowledge that Steve Jobs may be making anonymous charitable donations.

There has long been speculation that an anonymous $150 million donation to the Helen Diller Family Comprehensive Cancer Center at the University of California, San Francisco may have come from Mr. Jobs.

Bono has come to Steve Jobs defense and written a letter to the editor stating his support for the Apple founder.

---
As a founder of (Product)RED, I'd like to point out that Apple's contribution to our fight against AIDS in Africa has been invaluable. Through the sale of (RED) products, Apple has been (RED)'s largest contributor to the Global Fund to Fight AIDS, Tuberculosis and Malaria - giving tens of millions of dollars that have transformed the lives of more than two million Africans through H.I.V. testing, treatment and counseling. This is serious and significant. And Apple's involvement has encouraged other companies to step up.

Steve Jobs said when we first approached him about (RED), "There is nothing better than the chance to save lives."

I'm proud to know him; he's a poetic fellow, an artist and a businessman. Just because he's been extremely busy, that doesn't mean that he and his wife, Laurene, have not been thinking about these things. You don't have to be a friend of his to know what a private person he is or that he doesn't do things by halves. 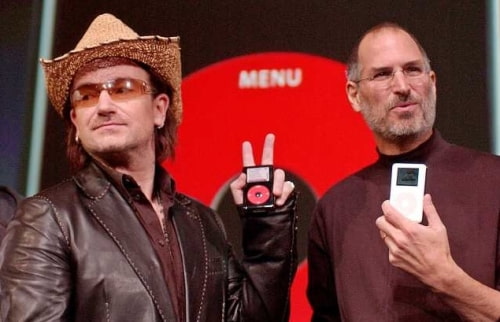 jack - September 4, 2011 at 10:49pm
I agree Bono is a useless irish tax avoiding wanker. His 'charities' earn him a fortune not the other way around.
Reply · Like · Mark as Spam

smate333 - September 3, 2011 at 4:00am
Many great successful figures are dirty, greedy, rotten little bastards. This brilliant f**k face went even so far that he corrupted the state of Tennessee to forge medical data to enable himself to purchase a liver. Well, the irony of God, it didn't matter how much money he had. Just because he is a genius, he will not avoid hell. A superb business man, but disgusting real life person, trust me, I happened to be unfortunate enough to be his waiter a couple of times, not once has he said thank you, none of the less tip, literally, a big zero scratched across, he had the nerve. Old waiters told me that he thought that would encourage us to get a better job. I do believe it possible that he has not give away any money, just look at how he refused paternity over his first kid. I'm not judging, just observing.
Reply · Like · Mark as Spam

FARP.Thor - September 2, 2011 at 5:33pm
It's absurd to criticize someone because he's not openly and publicly giving away half of his hard-earned money. This editor at NYT is a fool to even write something like this.
Reply · Like · Mark as Spam