Virgin America has named one of its Airbus A320 planes, 'Stay Hungry, Stay Foolish' in honor of a quote made popular by Steve Jobs.

The company told MacRumors that the name was chosen as part of an internal competition to name the plane. Virgin America is based in Silicon Valley and has 46 planes in its fleet.

During his 2005 commencement address for Stanford University, Steve Jobs says he spotted the phrase in The Whole Earth Catalog in the 1970's:

On the back cover of their final issue was a photograph of an early morning country road, the kind you might find yourself hitchhiking on if you were so adventurous. Beneath it were the words: "Stay Hungry. Stay Foolish." It was their farewell message as they signed off. Stay Hungry. Stay Foolish. And I have always wished that for myself. And now, as you graduate to begin anew, I wish that for you. 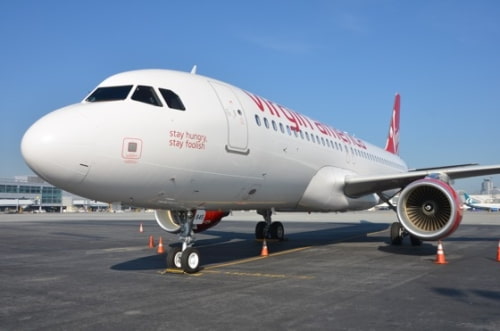 muller - January 24, 2012 at 5:19am
spread poverty spread stupidity - that is what for fanboys dollars went what a great heritage
Reply · Like · Mark as Spam
Recent