Steve Jobs was posthumously awarded the 2012 President's Award from the Cupertino Chamber of Commerce, reports Patch.com.

Apple senior manager for state and local government affairs, Michael Foulkes, attended the Chamber's 2012 STAR Award banquet to accept the award on Jobs behalf. The award is given to individuals in recognition of outstanding community service or exceptional leadership.

Tearing up as he took the podium, Foulkes said, "I forgot I was going to see a video of Steve, which is always hard to see. So, thank you Chamber of Commerce for this award. Steve hated awards, especially awards about him so I'm going to be very quick."

"We all miss him so much here, but, um, he believed that technology was a mental bicycle and that's all it was; nothing more, nothing less. It should make each of us be better than we are. He always followed that and the company still follows that, and hopefully will follow it for generations to come.

"So Steve lives in all of us. Those who worked with him miss him dearly but he lives in our hearts. All of you who have a device at home or in your pockets, hopefully that is your mental bicycle and make you be a better person than you are.

"And finally for all of us in Cupertino, we have a new campus coming forward designed by Steve. Steve designed this campus as a product. You'll be very excited as it comes to fruition. It's something that is an engineering marvel that will rival any building on the planet and something that Steve, up till the end made sure was going to be a lasting legacy for Cupertino of Apple. So thank you in Steve's honor for this award." 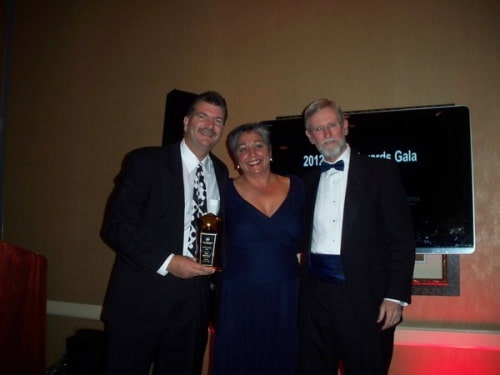 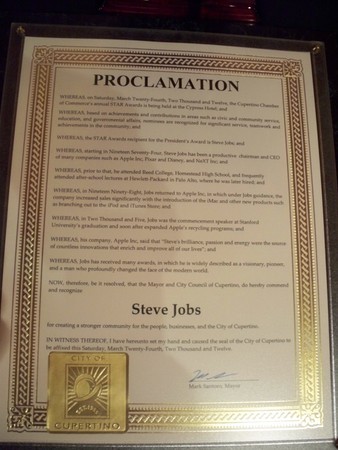