Vela Design Group announces VelaClock 1.4 for iPhone 3G, the original iPhone, and iPod touch. VelaClock is a world clock with unique features and an easily configurable user interface. Users can quickly display the time of sunrise, sunset, dawn and dusk for three kinds of twilight (civil, nautical, astronomical), moon phase and tilt, and much more.

VelaClock is invaluable to iPhone and iPod touch users who travel or communicate with friends and colleagues around the world. VelaClock's feature set makes it especially popular among photographers, enabling them to find the magic hour, the time of moonrise and the next full moon.

VelaClock divides the screen into two panes, the upper pane which contains a list of cities and a lower detail pane. Each row in the city list displays the country flag, city name, local time, day of week and a daylight bar (which can optionally be hidden). The daylight bar gives the user a picture of 24 hours of natural light (bright daylight, three kinds of twilight, and night). It may be centered at noon or the current time. A thin white bar indicates when the moon is visible.

The lower pane contains a detail area with one of three different panels of information. A quick swipe of the finger will alternate between the three panels.

1. First panel:
* Countdown to the next sunrise or sunset and next moonrise or moonset.
* Time of the next sunrise, sunset, moonrise and moonset.
* Name of the current moon phase.
* An image of the moon as seen in the sky above the currently selected city. This image accurately depicts the moon's phase, and the angle at which the moon's crescent appears to be rotated from the vertical. Because this angle can change rapidly, it is updated once a minute.
* Time until the next moon phase (new, quarter, full).

2. Second panel, for current day:
* Time of sunrise, sunset, moonrise, moonset, and three kinds of twilight (civil, nautical, astronomical) for both dawn and dusk.
* Azimuth of sunrise, sunset, moonrise and moonset. Azimuth (compass direction) is specified in degrees, 0 to 360, clockwise from North.
* Daylight duration in hour and minutes. Change in minutes of daylight from the previous day.

3. Third panel:
* Dates, times and images of the next four moon phases.

VelaClock 1.3 was reviewed by John Martellaro of iPod Observer and received a rating of "Outstanding." He said that "the US $3.99 investment is worthwhile."

What's new for VelaClock 1.4:
1. Allow the current date and time to be changed. This was a highly requested feature. Changing the current date provides the ability to view information such as sunrise, sunset and twilight times and moon phases for any day in the past or future. This is useful for planning travel, outdoor activities and photo shoots.

2. Display day of week below digital time for each city. This feature was requested by several users.

Up to 50 cities may be added from a selection of:
* Over 500 built-in cities. Many more cities will be added in a future release.
* Current Location. The current location is re-calculated each time VelaClock is launched. This feature is compatible with iPhone 3G, the original iPhone, and iPod touch.
* Home Location. Users enter a city name with an arbitrary latitude, longitude and time zone. 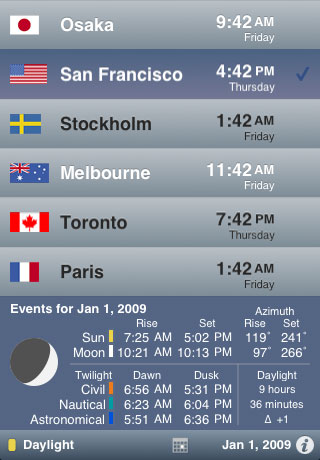 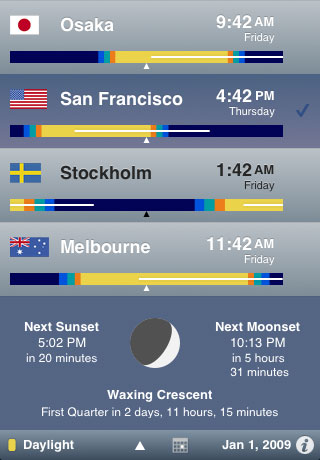 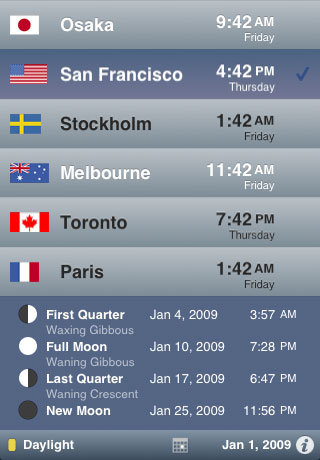 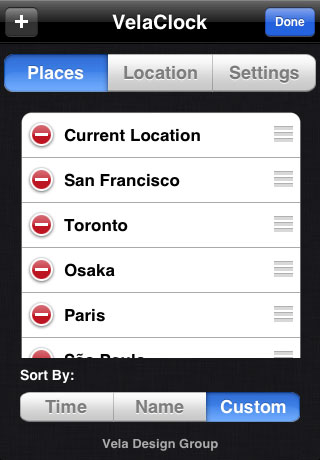 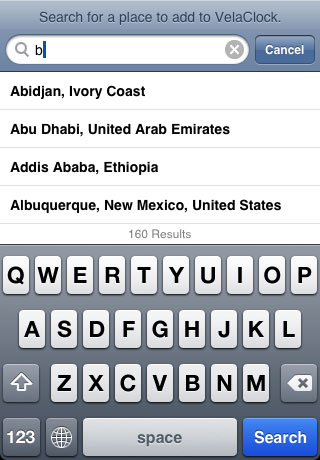 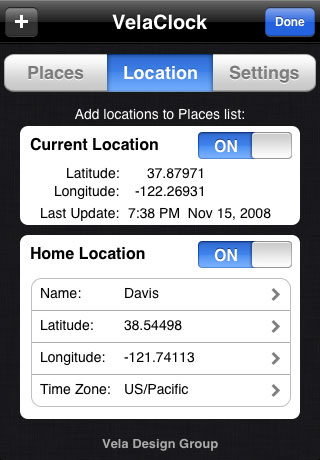