GiantCrayon Games releases ShiveringKittens, a quirky new iPhone game in which players rescue adorable kittens from the ice blocks that formed around them in a tough Minnesota winter. Players free the kittens by arranging falling blocks in the right order. The more ice blocks players connect, the more kittens they rescue and the more points they earn.

"As a cat lover, I'm excited to play a game that captures the cuteness of kittens," said Anne McElvain, GiantCrayon Games's VP. "It's my way of bringing the charm of kittens with me wherever I go."

With each kitten that players rescue, the satisfying ice crunch and plaintive meows of the freed kittens reward players for their efforts. For those players who want to amp up the challenge, ShiveringKittens comes in 10 increasingly difficult levels.

Moderncat calls ShiveringKittens, "an extremely addicting game in which you must rescue the adorable kittens by arranging falling blocks of ice. It has a boppy little theme song and 10 levels of difficulty which will give you many, many hours of entertainment. I just downloaded it and I can't stop playing!" 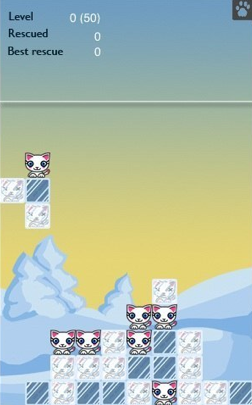