The game that allowed web users to create over five million amazing puzzles is now going mobile! inXile entertainment today announced the release of Fantastic Contraption for the iPhone and iPod Touch. Available now on iTunes with the 21 original levels as well as the "All Star Pack" of 20 additional levels for the introductory price of $2.99, Fantastic Contraption is a physics puzzle game that challenges players to build a machine to solve a puzzle.

"inXile entertainment's user generated content strategy focuses on products and web destinations that allow people to tap into their own creative ideas, and with the release of Fantastic Contraption on iTunes we are allowing this amazing internet game to go mobile," said Brian Fargo, chief executive officer of inXile entertainment. "We know that people love to show-off their creations, much like an online Reality TV Show - that is joy of user generated content. Once players beat a level in Fantastic Contraption, they can easily download other people's solutions or contraptions to see how they beat the same level. It is in that sharing of contraptions that player's imaginations are stimulated and in the end, will provide iPhone and iPod Touch users with an almost endless supply of mind-blowing puzzles."

In Fantastic Contraption, players build a machine from simple parts in order to move objects to a goal. Every level in Fantastic Contraption challenges players to solve puzzles anyway possible. Using basic tools consisting of nothing more than wheels and rods, players can create tanks, conveyor belts, catapults, slingshots, ramps, pulleys and whatever else the imagination can come up with in order to beat each stage. The iPhone and iPod Touch version of Fantastic Contraption will allow users to not only share the contraptions they have made to solve the built in levels, but they can use the level editor to create new levels and share them with other iPhone and iPod Touch users. 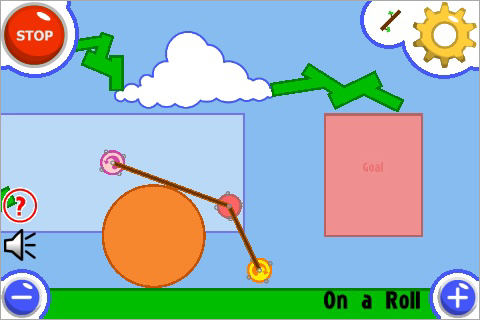