The U.S. International Trade Commission has ruled that Apple infringed on a Samsung patent and issued a cease and desist order for the AT&T iPhone 4, iPhone 3GS, iPad 3G, and iPad 2 3G.

Notice is hereby given that the U.S. International Trade Commission has found a violation of section 337 in this investigation and has issued a limited exclusion order prohibiting respondent Apple Inc. of Cupertino, California (“Apple”), from importing wireless communication devices, portable music and data processing devices, and tablet computers that infringe claims 75-76 and 82-84 of U.S. Patent No. 7,706,348 (“the ’348 patent”). The Commission has also issued a cease and desist order against Apple prohibiting the sale and distribution within the United States of articles that infringe claims 75-76 and 82-84 of the ’348 patent. The Commission has found no violation based on U.S. Patent Nos. 7,486,644 (“the ’644 patent”), 7,450,114 (“the ’114 patent”), and 6,771,980 (“the ’980 patent”). The Commission’s determination is final, and the investigation is terminated.

The import ban will go into effect unless vetoed by President Obama during the 60-day Presidential Review period. Apple can appeal the ruling to the United States Court of Appeals for the Federal Circuit.

FOSS Patents has more details at the link below... 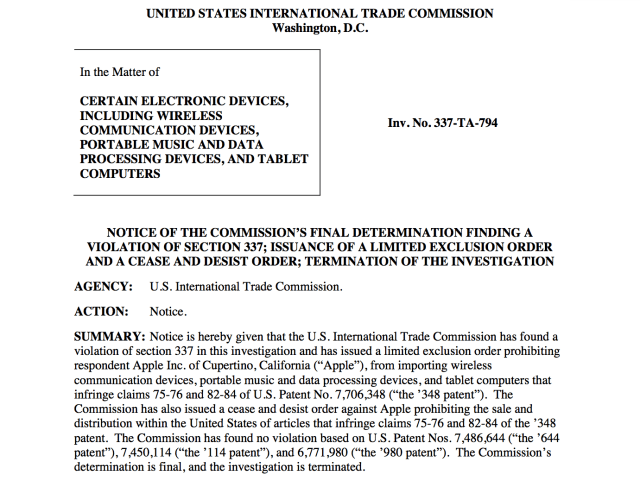 Nice news - June 4, 2013 at 10:46pm
Nice news. I especially liked the part where you guys explained what exactly was the infringement about. Not that I care either way, as I no longer care for Apple... HTC won me over with their ONE already. Fight away guys.
Reply · Like · Mark as Spam

Really? - June 5, 2013 at 12:15pm
This coming from someone that is reading material from a site based on 98% Apple products and or news! Your HTC One wouldn't have been possible without Steve Jobs a.k.a. Apple!
Reply · Like · Mark as Spam

because - June 5, 2013 at 2:49pm
That is because I've owned Apple devices since the 3GS and I still have the iPad (even though I don't use it anymore since I got the Surface Pro). I am still on my return period for the HTC One waiting to see if Apple make a miracle with the 5S and makes me want to come back, which doesn't seem like so. Anyway, yes Steve Jobs made smartphones possible, but he is no longer with Apple, sadly, and it shows... that is why new iPhones suck.
Reply · Like · Mark as Spam