Last June, the ITC ordered a Cease and Desist on older Apple products effectively banning Apple from importing them. The ITC found that Apple infringed on a Samsung patent related to cellular technology in AT&T models of the 3GS and 4 along with the iPad 1 and 2 3G models.

The ban is scheduled to go in effect August 5th unless President Obama steps in and vetoes the ban (which is highly unlikely seeing as it hasn't happened in the last decade).

Verizon Lawyer Randal Milch has asked President Obama to do just that, and issue a veto on the ITC ban. While the ban only effects AT&T models, Verizon sees the bigger issue of the precedent this would set.

What we have warned is that patent litigation at the ITC—where the only remedy is to keep products from the American public—is too high-stakes a game for patent disputes. The fact that the ITC's intellectual-property-dispute docket has nearly quadrupled over 15 years only raises the stakes further. Smartphone patent litigation accounts for a substantial share of that increase.

Here are three instances under which the president should veto an exclusion order:

• When the patent holder isn't practicing the technology itself. Courts have routinely found shutdown relief inappropriate for non-practicing entities. Patent trolls shouldn't be permitted to exclude products from our shores.

• When the infringing piece of the product isn't that important to the overall product, and doesn't drive consumer demand for the product at issue. There are more than 250,000 patents relevant to today's smartphones. It makes no sense that exclusion could occur for infringement of the most minor patent. 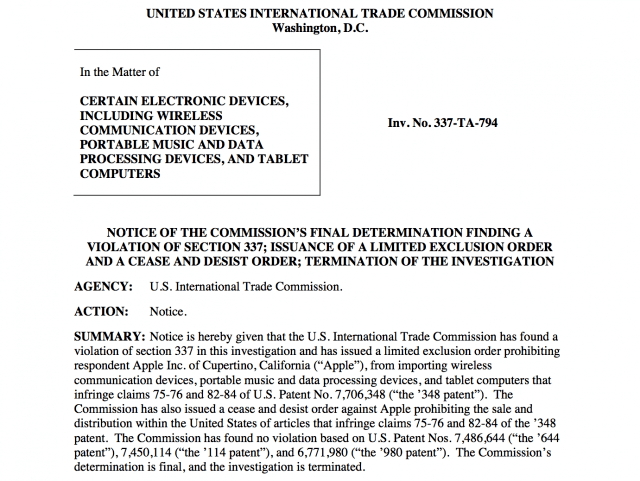 iphone is beast, perfect - July 26, 2013 at 1:42pm
And soon, it's going to be a tvone (tv phone) when the galagays still incease the bigger size of the phone year after year. No new material, no improvements from the same old laggy shit, nothing. Besides, scamsuck is just a wannabe, the phones, craplets, and fagtops are all shit. iPhone is still the top phone in the U.S. dude, lamedroid is bad for one thing, and the best part about iphone is jailbreak meaning over hundreds of effects.
Reply · Like · Mark as Spam