The Wall Street Journal reports that Steve Jobs is actively involved in running Apple from home and that he is expected back in June.

People inside the company, business partners and others who are familiar with the situation say life at the Cupertino, Calif., company remains much the same as it did before. Those at other corporations who deal with the company also say their interactions with Apple haven't changed. Mr. Cook, who had already been handling most of Apple's day-to-day operations, has kept tight control over the company, say business partners and those inside Apple.

The WSJ also suggests that Jobs is working on a new device smaller than the MacBook Air and bigger then the iPhone.

Apple co-founder Mr. Jobs, who is considered the company's creative leader, is also involved in the development of future projects, they say. People privy to the company's strategy say Apple is working on new iPhone models and a portable device that is smaller than its current laptop computers but bigger than the iPhone or iPod Touch.

Apple spokesman Steve Dowling is quoted as saying "Steve continues to look forward to returning to Apple at the end of June." 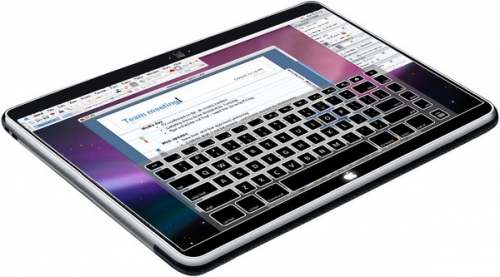