Apple's market share has received a boost from the iPhone 5s and iPhone 5c but has not seen the same uplift as when the iPhone 5 was released, according to sales data from Kantar Worldpanel ComTech for the three months to October 2013. Kantar notes that across the major European markets, Android remains number one with 70.9% share. Apple holds 15.8% share and Windows continues to see rapid growth, now accounting for 10.2% share.

Dominic Sunnebo, strategic insight director at Kantar Worldpanel ComTech, comments: "In almost all markets, the iPhone 5S and 5C releases have given iOS a significant bounce compared to the previous month. Generally, Apple’s share of the market still remains lower than when the iPhone 5 was released, although this is not wholly unexpected as shoppers tend to react more positively to ‘full’ releases than incremental improvements such as the 5S and 5C."

“However, the new releases have led to spectacular results in certain markets. In Japan, where the iPhone is now available via the country’s largest carrier NTT DoCoMo, Apple’s share hit 76.1% during October. In the US, Apple’s October share reached 52.8%. Mainland Europe remains more challenging for iOS, particularly in markets like Italy and Germany where handset subsidies are far lower. Britain is more positive; iOS sales share is now at 28.7% for the last 3 months, with sales driven by the higher-end 5S model which has outsold the 5C by three to one since their release.”

Notably, the iPhone 5c appears to be attracting new customers to the brand.

Sunnebo continues, “The cheaper 5C appeals to a broader audience than Apple usually attracts. In the US, the biggest demand for these mid-end models is coming from lower income households. Some 42% of iPhone 5C owners earn less than $49,000 compared with just 21% for iPhone 5S. iPhone 5C customers also tend to be slightly older at an average of 38 years compared to 34 years for the 5S. The good news for Apple is that this wider appeal is attracting significant switching from competitors. Almost half of iPhone 5C owners switched from competitor brands, particularly Samsung and LG, compared with 80% of 5S owners who upgraded from a previous iPhone model.”

While Windows' market share is continuing to grow reaching close to 5% in the U.S., its growth remains on low end smartphones like the Lumia 520 and 620. The OS is also having trouble in the Chinese market where its market share is only 3.5%.

More in the full report linked below. 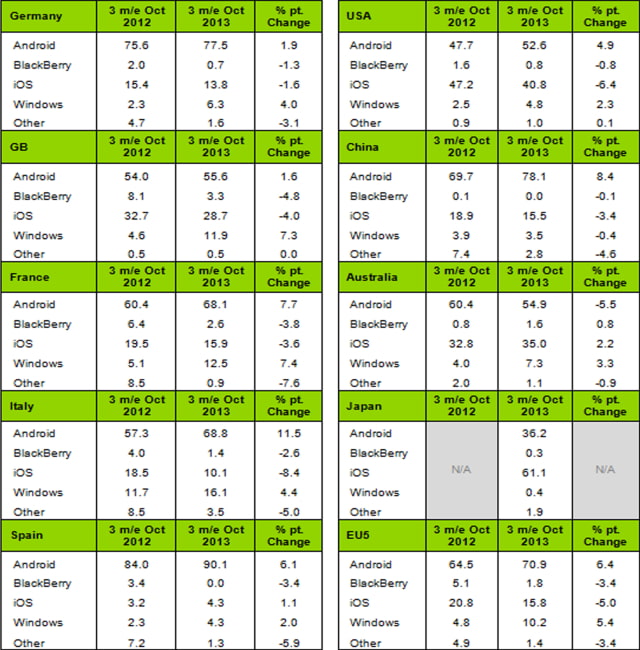