The App Annie Japan Spotlight report shows how Japan has not only overtaken the United States for app store revenue dominance but also shows no signs of abating in its growth.

2. Sheer Majority of Game Revenue Growth Driven by Just Five Publishers
It’s an astounding fact, but the game revenue growth that has catapulted Japan to the number one spot has been mostly driven by just five publishers. One of them is the messaging powerhouse LINE. Another one of them is Puzzle & Dragons maker GungHo Online.

3. The Growth Isn’t Over
If 2013 was the year where Japan’s smartphone penetration caught up with the US, 2014 will be the year where it completely obliterates things. By next year, 62% of mobile phones in Japan will be smartphones (compared to 50% in the US) according to eMarketer. The impact this will have on app downloads and revenue is a mouth-watering prospect for businesses invested in that region of the world.

You can download the full report from the link below.... 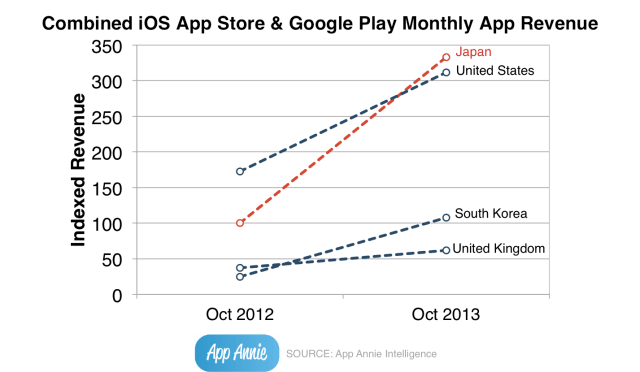