Palm is casting a viral video in Seattle that will shoot from tomorrow till June 5th.

A Pre Central commenter posted some details regarding the video.

I know this will fall into the unsubstantiated rumor category, but here's what I learned today: I was at a casting studio auditioning and noticed next door they were holding a casting session for the "Palm Pre Viral" campaign. It was a non-union gig, so I hadn't been asked to audition, but I talked to one of the actors after he left the room.

The "viral campaign" begins, contractually, tomorrow. They are going to put the actor up in an apartment in Seattle. The actor is going to pretend he is a man who is upset because the Pre has not been released. He will have a camera on him in his "living room" and will be posting to Facebook and MySpace all day. The idea is that he won't leave his apartment until Palm releases the Pre. The ad agency was calling it a "protest." Eventually, the actor learns Palm knows about his protest and then they make contact - finally giving in to his demands. The actors have been told they will be done with the shoot on June 5th.

So, June 6th, a Saturday is looking like a good bet from what I've just heard.

Actors often know of things ahead of time because of ad campaigns.

Gizmodo has confirmed this information and posted the casting notice. 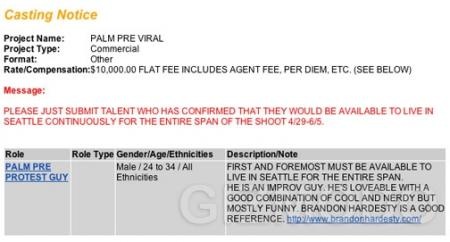