After an update to the Nine Inch Nails iPhone app was rejected by Apple, Trent Reznor had some harsh words for Apple.

Apple rejected the application citing that it violated section 3.3.12 of the SDK agreement which states, "Applications must not contain any obscene, pornographic, offensive or defamatory content or materials of any kind (text, graphics, images, photographs, etc.), or other content or materials that in Apple's reasonable judgement may be found objectionable by iPhone or iPod touch users."

The group was told that the objectionable content referenced was "The Downward Spiral".

Thanks Apple for the clear description of the problem - as in, what do you want us to change to get past your stupid fucking standards?

And while we're at it, I'll voice the same issue I had with Wal-Mart years ago, which is a matter of consistency and hypocrisy. Wal-Mart went on a rampage years ago insisting all music they carry be censored of all profanity and "clean" versions be made for them to carry. Bands (including Nirvana) tripped over themselves editing out words, changing album art, etc to meet Wal-Mart's standards of decency - because Wal-Mart sells a lot of records. NIN refused, and you'll notice a pretty empty NIN section at any Wal-Mart. My reasoning was this: I can understand if you want the moral posturing of not having any "indecent" material for sale - but you could literally turn around 180 degrees from where the NIN record would be and purchase the film "Scarface" completely uncensored, or buy a copy of Grand Theft Auto where you can be rewarded for beating up prostitutes. How does that make sense?

Come on Apple, think your policies through and for fuck's sake get your app approval scenario together.
----- 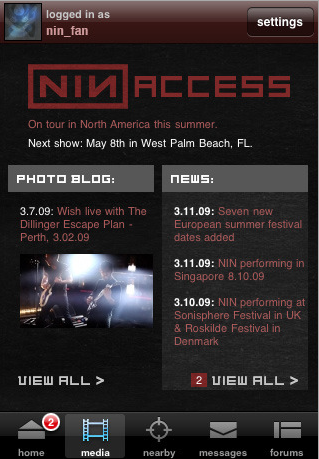 ANUBIS - May 4, 2009 at 8:30pm
Trent is the MAN!!! He totally made some legit, rock solid points. I used to be an Apple fan boy but there tight grip on their hardware and software is quite suffocating. They totally have gotten way too big for their britches and have forgotten all the fans and loyal customers who made them what they are. FUCK APPLE and STEVE JOBS and all of their RED TAPE BULLSHIT.
Reply · Like · Mark as Spam
0

George - May 4, 2009 at 1:55pm
Trent has a great point, and Apple should be ashamed of themeselves... he made them look like absolute fools. Apple could get around such issues if they implemented an age screening tool at the time of account registration. I dont see why they havent done so by now.
Reply · Like · Mark as Spam
Recent