Chevron hopes to expand Apple Pay to gas pumps in early 2015, according to a tweet from the company. While Chevron is already an Apple Pay partner for in-store purchases, the company does not offer Apple Pay as a more convenient pump-side payment option.

We are working alongside Apple to develop solutions to integrate with Apple Pay at the pump by early 2015.

Previously, a Chevron spokesperson indicated the company was working with Apple to enable Apple Pay at gas pumps as well.

Chevron later clarified its tweet saying any timeline for an Apple Pay rollout at gas pumps still remains unclear and that the company will continue to rollout Apple Pay for in-store sales.

To clarify, Chevron is working alongside Apple to integrate Apple Pay at the pump, but a timeline is not set. Chevron will continue rolling out Apple Pay for in-store sales to 3,000 stores this year.

Early Apple Pay numbers show the payment system has potential to become one of the first widely-adopted mobile payment systems. While Apple Pay is still limited to the United States, Apple plans to expand to multiple countries in 2015. 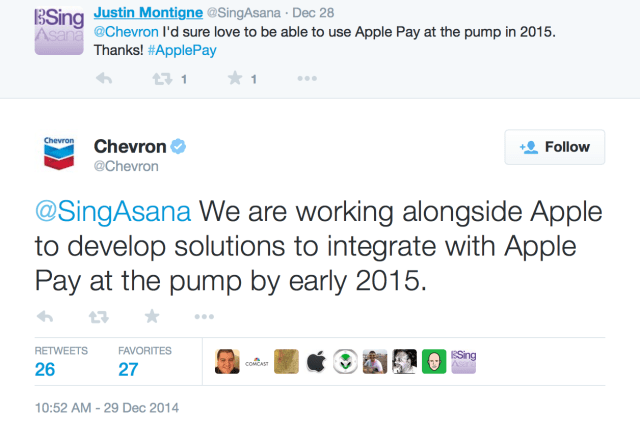 Justabrake - December 30, 2014 at 1:52am
I'm sure chevron will up the CC price because of the increase in fees for this alone and you apple fans will pay more because it's an apple idea, I'd rather pull out cash and get the better price !
Reply · Like · Mark as Spam