The Charitybuzz auction to have lunch with Apple CEO Tim Cook has ended, raising $200,000 for the Robert F. Kennedy Center for Justice and Human Rights. The auction winner also gets 2 VIP passes to an Apple Keynote.

Bid now on this opportunity to have lunch with Apple CEO Tim Cook on campus in Cupertino, California, and to be his guest at an Apple keynote event! Tim was recently ranked #1 on Fortune magazine’s 2015 list of the World’s Greatest Leaders, and in 2014 he was named Person of the Year by the Financial Times.

This is the third time Cook is auctioned off his time for charity. The first time the auction ended at $610,000 and the second time it raised $330,000. 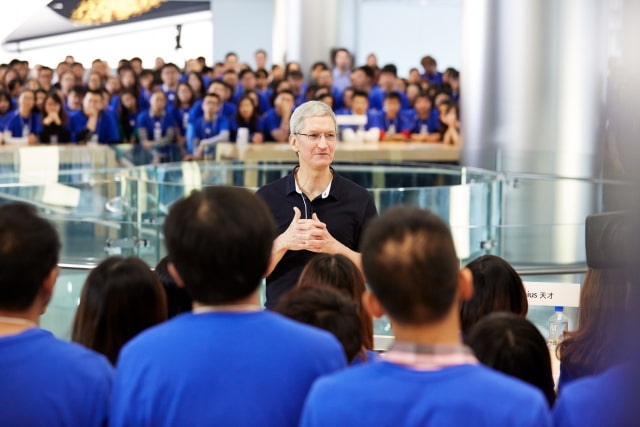 iDick - May 9, 2015 at 11:34pm
Lunch value is going down every time they auction , exactly same as their product value and quality. It's keep going down whenever they release (copy ) new product
Reply · Like · Mark as Spam

PaladinLV - May 7, 2015 at 6:48am
That could have bought 4 track chairs for wounded warriors. I'm sure the RFK Center for Justice really needs the donation! Right? Maybe next time you can give it to the Clinton Foundation. Oh I forgot, more milage IF she's elected President. I guess LIBERALS think giving to Charity is giving to LIBERAL causes like "justice" rather then men and women who could really use it to improve and make their broken lives better. Enjoy your lunch with Tim, and by all means, don't choke!
Reply · Like · Mark as Spam

ykh - May 7, 2015 at 8:41am
Would you rather help wounded soldiers today or make sure there aren't any tomorrow? I agree, it's important to help war vets especially those with disabilities, but we have to consider tomorrow as well. There'll always be causes needing donations and one can't really argue which is nobler; what about cancer or AIDS? how about Palestinian kids? Africans?! ...
Reply · Like · Mark as Spam
Recent