Apple cancelled its plans to make an Apple-branded television set last year, according to the Wall Street Journal.

In addition to an ultra-high-defitinion display (4K), Apple searched for many features that would justify building such a television set. According to the report, the company considered adding cameras that would enable video calling (FaceTime) through the set. It also worked on a prototype display that was transparent when turned off (like glass), but used lasers to display an image when turned on. Apple scrapped the display because it used too much power and the image quality was poor. It eventually patented the technology in 2010.

Apple spent nearly a decade of research on the TV set, but executives didn't consider of any of the features 'compelling' enough to enter such a competitive market. Instead of releasing an entire TV set, Apple is now focused on creating a service with an Apple TV box. The device, as has been rumored, will be announced at WWDC in June. Apple is also in talks with content providers to create a bundled set of channels that would be streamed to Apple TVs -- the company plans to begin programming this Fall.

Apple's next generation Apple TV is set to be unveiled at WWDC.The device is rumored feature a revamped remote with touch pad, deep Siri integration, and third-party app support. The box is itself is twice as large as the current generation Apple TV, but slimmer. 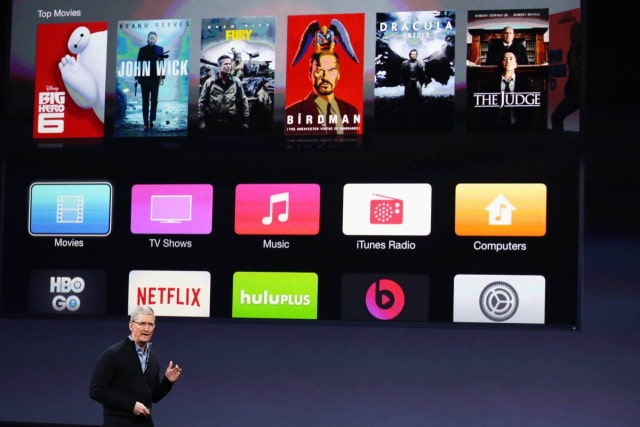 paulMOGG - May 19, 2015 at 1:30am
Well TV or not I guess apple needs to think deep about this product as it seems to becoming a thing of the past world wide as people want to watch their choice of visuals and have been using their own personal computers iPads and phones for quite a while now , just needing it totally on demand to fit their lifestyles and timing ...
Reply · Like · Mark as Spam