Adium 1.3.6 is an update to the free instant messaging application for Mac OS X.

Whats New:
It includes an updated version of libpurple which fixes the vulnerability revealed earlier this week which has the potential to allow another user to run code by sending you a specially crafted message over the MSN protocol plus many Yahoo regressions from 1.3.5, one of those being the problem where Yahoo contacts had signed off still appeared as online.

1.3.6 also features an updated version of the Facebook chat plugin, fixing a number of issues, which were present in Adium 1.3.5 including unwanted email notifications, dropped messages and missing contact icons.

You can download the update using the link below... 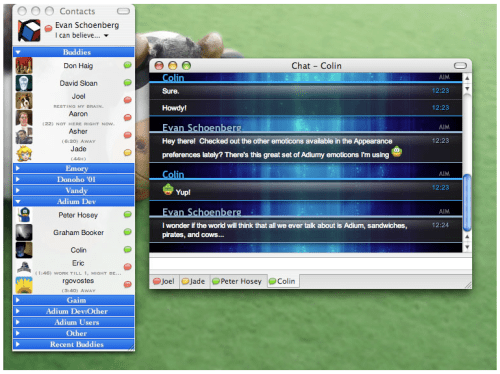 xavier - August 21, 2009 at 7:03am
There is a problem here. when i login to Facebook with using Adium. The Facebook in the browsers there will automatically logout. Is there anywhere to tell facebook that i need to logoff my facebok chat room in the browsers?
Reply · Like · Mark as Spam
0

DistortedLoop - August 20, 2009 at 6:38pm
Adium just doesn't interest me until they add webcam support. While an all-in-one chat client would be nice, it's really no problem on any modern laptop or desktop to have iChat, Skype & Yahoo all running at once on an OS X machine.
Reply · Like · Mark as Spam
0