Apple Watch orders started with bang but have settled down to average around 30,000 per day in the U.S., according to data from Slice Intelligence.

Apple is believed to have taken 2.5 million watch orders through Monday, May 18th, based on Slice projections that looked at more than 14,000 shoppers. More than half of those orders were on April 10th, the first day of Apple Watch pre-orders.

Quartz compiled the data from Slice to determine the average orders per day in the United States. That number has generally remained under 30,000 per day. There was a small spike on April 24th, the first day users began receiving their initial Apple Watch pre-orders and posting about it online.

Notably, Apple has yet to begin selling the Apple in retail stores. That should happen sometime in June. Apple Watch bands just became available for purchase at retail stores yesterday. It will be interesting to see how in-store availability affects sales. 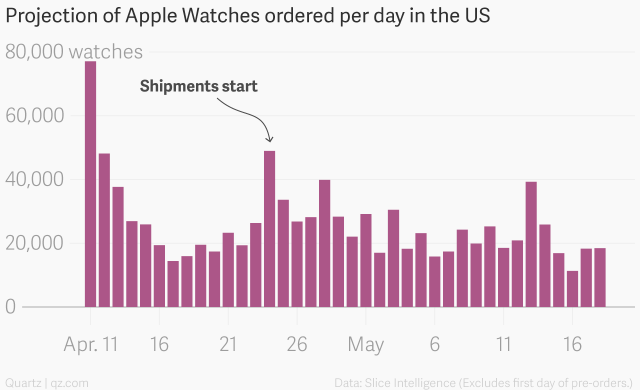