Old Jewel Software has released version 2.1.9 of LazyMouse. Version 2.1.9 is a minor update, but offers a change in its pricing structure: It's now free for users of Mac OS X 10.4 Tiger. If someone installs LazyMouse on Tiger, they will not need to purchase a license key and they will not see a registration reminder as they have in the past. In the spot where a registration key would go, they will see a note: "free to users of Tiger." If that person then upgrades their OS to Leopard or later, LazyMouse will again show registration reminders. Users who are running registered versions of LazyMouse will be unaffected by this change.

LazyMouse is a Preference Pane that moves the user's cursor to the default button whenever a dialog box appears on the screen. In other words, it saves time moving the mouse to dismiss dialogs. It is a simple utility, yet it's Old Jewel Software's most popular offering.

As of the next version of LazyMouse, it will require Mac OS X 10.5 or later. Since there will be no more updates available for users running Tiger, Old Jewel Software made the choice to offer it for free to Tiger users. LazyMouse has a history of supporting legacy operating systems, but the move to Leopard is inevitable. 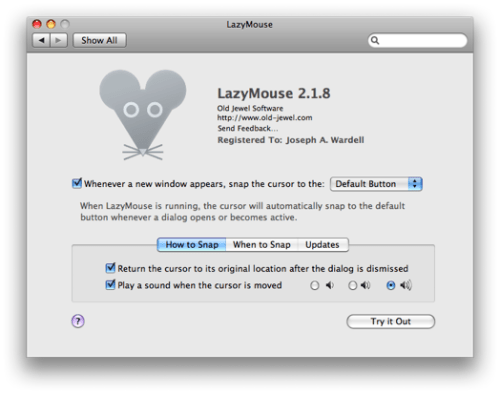