Google paid Apple $1 billion in 2014 to keep its search bar on the iPhone, reports Bloomberg. In addition, Google has an agreement with Apple to give the company a percentage of revenue generated through Apple devices.

The deal was revealed in the court proceedings of Oracle's copyright lawsuit against Google.

The revenue-sharing agreement reveals the lengths Google must go to keep people using its search tool on mobile devices. It also shows how Apple benefits financially from Google’s advertising-based business model that Chief Executive Officer Tim Cook has criticized as an intrusion of privacy.

Oracle has been battling Google since 2010 over claims that the company used its Java software without paying for it to develop Android. Last year, the U.S. Supreme Court declined to hear the case sending it back to a lower court where Google must argue it made fair use of Oracle's APIs.

Annette Hurst, the Oracle attorney who revealed the details of the Google / Apple agreement, said that pretrial a Google witness revealed that “at one point in time the revenue share was 34 percent.” Robert Van Nest, a Google attorney objected to the mention, "That percentage just stated, that should be sealed. We are talking hypotheticals here. That’s not a publicly known number."

The magistrate judge presiding over the hearing refused Google's request to block the information from public review but Google followed up with a request to seal and redact the transcript indicating it could hurt is ability to negotiate similar agreements with other companies. Apple also submitted a filing to request the transcript be redacted.

“The specific financial terms of Google’s agreement with Apple are highly sensitive to both Google and Apple,” said Google's filing. “Both Apple and Google have always treated this information as extremely confidential.”

The transcript vanished without a trace at about 3pm PT yesterday, says Bloomberg.

More details at the link below.... 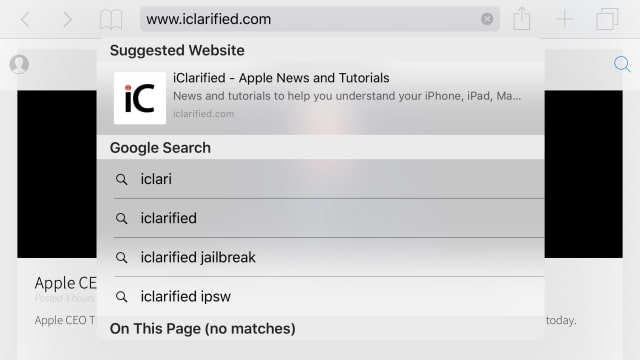 Average Reviewer - January 22, 2016 at 4:39pm
I don't think google understands that if apple removed the search bar we would just switch to a different browser that would still use it like Chrome
Reply · Like · Mark as Spam

Average Reviewer - January 22, 2016 at 4:40pm
I mean honestly if it were removed eventually we would switch platforms because personally I use google apps and gmail all the time so everything I do it through Google for work
Reply · Like · Mark as Spam

joshWUa - January 22, 2016 at 9:44am
Wouldn't of even bothered and switched to chrome. Simple as that... But hey Apple let them have it hahahaha
Reply · Like · Mark as Spam

JohanDo - January 22, 2016 at 6:49am
Duckduckgo.com is getting more n more users... And not wondering why since its better than Google! Its not first time big seatch engine has fallen. Duck altavista.... :)
Reply · Like · Mark as Spam
1 More Comment
Recent