A refurbished version of the fourth generation Apple TV is now available to purchase through Apple's online store. The Apple TV 4, which originally was released in September 2015, was the first major revision to the Apple TV in years. The device brought the App Store, Siri, universal search, and more.

The device is in stock, ready to ship, and comes with a one-year warranty. 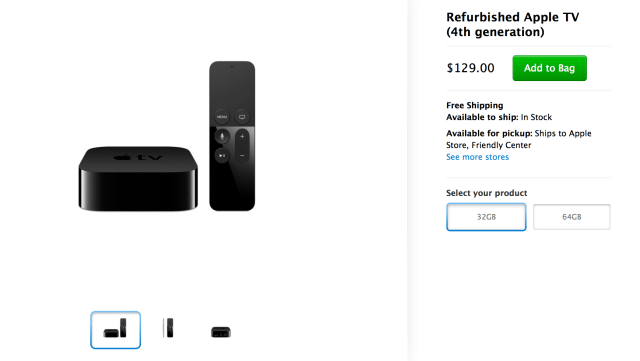 DICK - January 26, 2016 at 11:23pm
It's because that's how the price is and how it's build quality judges that's and they're that different than the rest of other companies.
Reply · Like · Mark as Spam

Ban the Trolls - January 26, 2016 at 11:28pm
What is your comment supposed to mean exactly? They don't have the right to resell returned or refurbished products? The sell many of their products refurbished after a certain amount of time. What do expect them to just throw them away? And it's spelled "quality" by the way.
Reply · Like · Mark as Spam

m_thoroughbred - January 27, 2016 at 11:03pm
These are apple tv that people may have returned cause the didn't like it. Once the plastic seal is open they can't resell it for the original price. You still get the same warranty on a refurbished item as you do a new one.
Reply · Like · Mark as Spam
Recent