Bernie Sanders, a candidate for the Democratic nomination for President of the United States, was asked if Apple is destroying the fabric of America in an interview with the Daily News Editorial Board. Sanders said that Apple was not but he wished they would manufacture in America and stop trying to avoid paying taxes.

Daily News: You’ve said that the greed of Wall Street and corporate America is destroying the fabric of our nation. So if we can get particular: For example, in corporate America, Apple happens to be celebrating, today, its 40th birthday. It's a company that grew from nothing to 115,000 permanent employees. And I'm wondering, is Apple destroying the fabric of America?

Bernie Sanders: No, Apple is not destroying the fabric of America. But I do wish they'd be manufacturing some of their devices, here, in the United States rather than in China. And I do wish that they would not be trying to avoid paying their fair share of taxes.

His comments are similar to Donald Trump's, who said "We're going to get Apple to start building their damn computers and things in this country instead of in other countries."

You can read or listen to Sanders' full interview at the link below... 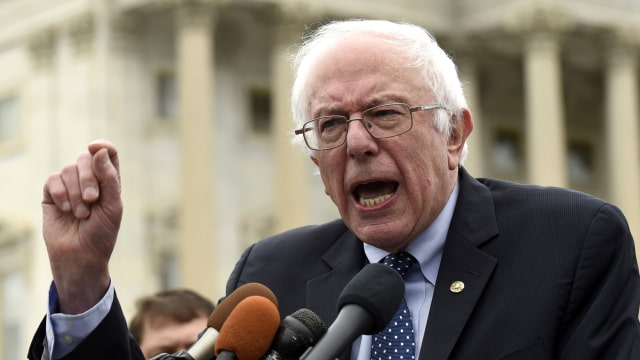 Tjp - April 12, 2016 at 2:12am
Bernie, do you take any deductions from your taxes. Stop it and pay your fair share. Apple is only taking advantage of what the laws allow.
Reply · Like · Mark as Spam

Infowarrior - April 7, 2016 at 11:42pm
Bernie needs new dentures. Anyone who wants this Republic to be run by a 90 year old socialist who seems to forget his denture glue before speeches needs to get their head out of their arse, read a history book and learn what kind of f'ing amazing happened here in and around 1776.
Reply · Like · Mark as Spam

phdlynn - April 6, 2016 at 7:21pm
The MacPro is made in America. The US does not have the number of skilled techs or factories to make the phones in the US and at what increased cost. Apple pays the taxes it owes. What Bernie wants is for money earned overseas to be forced to be brought home and then pay 40% taxes, the same as on US sales. Hardly fair! Find some other way to pay for your free shit Bernie!
Reply · Like · Mark as Spam

HillaryForPrison2016!!! - April 6, 2016 at 1:28pm
Bernie: "In my first year of office, I will instruct the department of Agriculture to plant magical trees where all free SHIT will grow!" HAHAHAHAHAHAHAHA
Reply · Like · Mark as Spam
17 More Comments
Recent