A new report corroborates rumors that Apple is planning to release three new tablets for 2017 but says that the new devices may not arrive until later in the year.

Recent reports have suggested that we could see three new iPads this year including a lower cost 9.7-inch iPad, a 12.9-inch iPad Pro, and a new 10.5-inch iPad. Sources say that while production may start in the first quarter of 2017, these iPads may not get released until 2H17.

The products are still in planning, with the 9.7-inch model expected to enter mass production in the first quarter, and the other two in the second, according to sources from the related upstream supply chain. However, these tablets may not be announced or even released in the market until the second half of 2017, the sources said.

The same sources say that Apple is considering having the 10.5-inch iPad replace the current 9.7-inch product line with the new 9.7-inch iPad become an entry-level device. The 9.7-inch iPad may have its components procured from secondary suppliers with Seoul Semiconductor supplying the LED instead of Nichia.

The 10.5-inch iPad will reportedly be equipped with an A10X processor, as will the 12.9-inch iPad Pro. Most of the components will be supplied by Apple's primary suppliers. 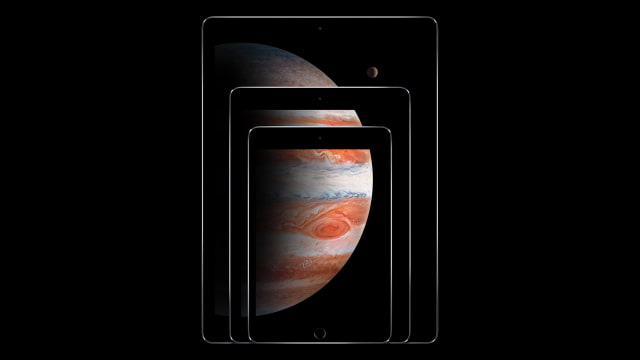