Apple has announced that it will update the Mac Pro with better specs this week and revealed that a completely redesigned Mac Pro and Pro Display are on the way.

The new Mac Pro is being 'completely rethought' and will have a modular design to accommodate high-end CPUs and GPUs, reports Daring Fireball. Gruber was one of five reporters invited to Cupertino to hear about Apple's plans.

Apple typically doesn't reveal anything about its future plans but with the Mac Pro not having seen an update in over 1,200 days, professional users had reached new levels of anxiety over the uncertain future of pro devices at Apple.

Phil Schiller, Craig Federighi, and John Ternus were at the meeting to speak for Apple, here's Schiller's on the record statement via Daring Fireball:

---
With regards to the Mac Pro, we are in the process of what we call “completely rethinking the Mac Pro”. We’re working on it. We have a team working hard on it right now, and we want to architect it so that we can keep it fresh with regular improvements, and we’re committed to making it our highest-end, high-throughput desktop system, designed for our demanding pro customers.

As part of doing a new Mac Pro — it is, by definition, a modular system — we will be doing a pro display as well. Now you won’t see any of those products this year; we’re in the process of that. We think it’s really important to create something great for our pro customers who want a Mac Pro modular system, and that’ll take longer than this year to do.

The CPUs, we’re moving them down the line. The GPUs, down the line, to get more performance per dollar for customers who DO need to continue to buy them on the interim until we get to a newly architected system.
---

"We designed ourselves into a bit of a corner," Craig Federighi, Apple SVP of Software Engineering said of the current Mac Pro's cylindrical chassis. "We wanted to do something bold and different. What we didn’t appreciate completely at the time was how we had so tailored that design to a specific vision that in the future we would find ourselves a bit boxed in — into a circular shape."

It's great to hear that Apple has something in the pipeline for professionals users although many will still be disappointed in having to wait so long. 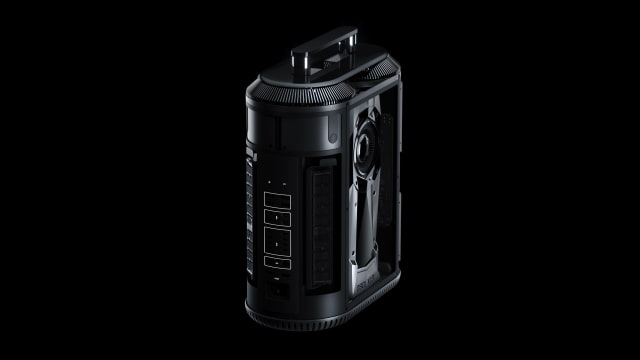 Jack Turner - April 4, 2017 at 6:23pm
If this isn't enough to encourage Oculus to realize that Apple computer is capable of VR technology like every other computer (since they once said they wouldn't release one for Apple until they've made a 'good' computer), nothing will. Judging from the looks, the design is alright that I hope it remains similar to the current one, but what I'm saying is that the picture here about the Mac Pro (its expected look) looks like it has twice of everything from the current one.
Reply · Like · Mark as Spam

drigo marki - April 4, 2017 at 3:08pm
I just don't see a point of such a design. It looks like average gamer's PC. I miss aluminum silver unique design. Oh, well... who likes it can have it. Lately M$ Surface Pro 4 looks very interesting for my needs. But again, I'm not designer or artist. Hopefully this machine finds customers and development at Apple corp continues.
Reply · Like · Mark as Spam

dongdo extraca - April 4, 2017 at 6:24pm
I like the black look on the current one. It makes the lights in the dark look cool. I'm not sure about silver if it were to happen.
Reply · Like · Mark as Spam
Recent