The Apple iPhone 7 was the World's Best Selling Smartphone in Q1 of 2017, according to data from Strategy Analytics.

Global smartphone shipments reportedly reached 353.3 million units in Q1 with the top five models accounting for 1 in 6 of all smartphones shipped.

“We estimate Apple iPhone 7 shipped 21.5 million units and captured 6 percent marketshare worldwide in Q1 2017", said Juha Winter, Senior Analyst at Strategy Analytics. "The iPhone 7 is by far the world’s most popular smartphone model, due to a compelling blend of user-friendly design, extensive supporting apps, and widespread retail availability for the device. Apple iPhone 7 Plus, with its bigger screen and higher pricing, shipped 17.4 million units for second place and 5 percent marketshare worldwide in Q1 2017. Apple today accounts for two of the world’s top five smartphone models.” 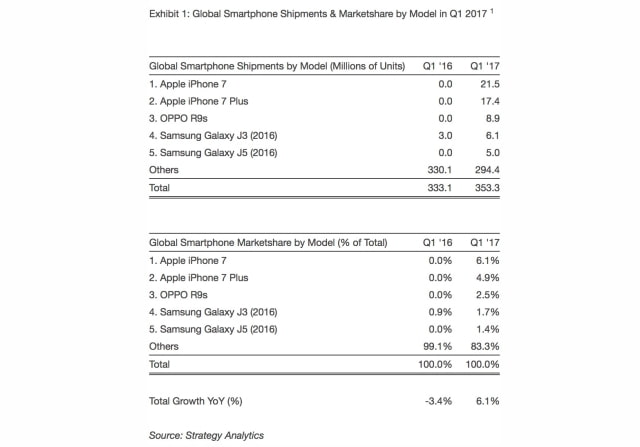 Chinky Chink - May 10, 2017 at 6:53pm
...and it is also the world's best iPhone that could drop a signal in a heartbeat. I thought it was just a fluke but after 3 replacement no luck. So glad I kept my 6s much better than the 7 in signal reception.
Reply · Like · Mark as Spam