There’s a new flock on the block. Hatch, collect, and evolve over a hundred all new Angry Birds characters from the other side of the tracks, and kick the pigs off of Bird Island while you’re at it.

Something is causing the the pigs to herd to Bird Island in droves, and the birds have found their eggs in danger once again. It’s up to you to assemble an unstoppable team of evolved super birds and put a stop to the pigs’ shenanigans once and for all. Or at least until the next time they pull a stunt like this...

Highlights:
● Collect, assemble, and evolve your flock.
100+ crazy new Angry Birds?! We’re gonna need a bigger nest. The flock is bigger and badder than ever before. Build your own team, combine super skills and evolve your birds into their ultimate form.

● Embark on an epic adventure.
Something sinister is brewing on Bird Island. Why are there so many pigs around? Who is behind the mysterious Bacon Corp? What’s the Eagle Force? Who lost the dungeon keys? Find the answers – only in Angry Birds Evolution.

● Crush the pigs in explosive battles.
What’s worse than egg-stealing pigs? Over 90 different varieties of egg-stealing Pigs, that's what. Pirates, ninjas, tourists – someone has to clean this place up. Let the feathers fly in full contact battles and send the pigs packing.

● Join weekly events.
Earn awesome rewards, and get a chance to add extra rare birds to your team by taking part in weekly events. Join by yourself or assemble a clan of buddies to compete with other clans. Build the strongest, most awesome clan on Bird Island and rule the roost!

● Compete against other players.
The Oinktagon: two teams enter – only one leaves (victorious). Challenge other players in PVP tournaments of the Bird Island pastime, Pigball, and dominate the leagues for even more awesome rewards. 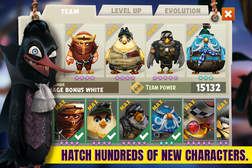 FEATURES:
– Over 100 colorful new characters to hatch and collect.
– Assemble the ultimate flock of birds and take down the pigs with ease.
– 5 Classes of birds with unique abilities.
– Evolve your feathery heroes into unstoppable super birds.
– Explore the island and stop the Bacon Corp.
– Battle other players in the Oinktagon.
– Join clans to unlock perks, compete with other clans, and chat with clanmates.
– Send out scouts for rewards & challenges.

You can download Angry Birds Evolution from the App Store for free. 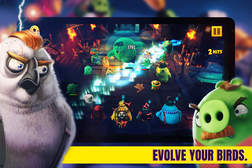 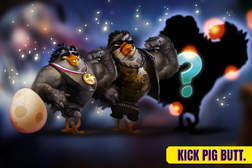