The Apple iPhone 8 is selling like an 'S' model, according to data from Consumer Intelligence Research Partners.

“The newest iPhone models, 8 and 8 Plus, represented a relatively small share of total US iPhone sales in the quarter,” said Josh Lowitz, CIRP Partner and Co-Founder. “This of course makes perfect sense, since they were available for only a couple of weeks at the end of the quarter. On the other hand, in the same time frame last year, iPhone 7 and 7 Plus together accounted for 43% of sales. Two years ago, the iPhone 6S and 6S Plus represented 24% of sales. And, three years ago, the iPhone 6 and 6 Plus were 46% of sales in their launch quarter. So, in terms of consumer demand and reception, the 8 and 8 Plus have a share of total sales that makes them look much more like an ‘S’ model, while the 7 and 7 Plus was closer to the very well-received 6 and 6 Plus. This is not surprising, as the form factor remained the same, and the improvements in features were incremental and internal.”

“It seems when Apple announced the the forthcoming iPhone X, it changed the market dynamic, and probably depressed demand for the iPhone 8 and 8 Plus,“ added Mike Levin, CIRP Partner and Co-Founder. “Both the newly reduced-price iPhone 7 and 7 Plus and older iPhone models continue to see strong demand. The 7 and 7 Plus account for 58% of sales in the quarter, much higher than the 35% for the then year-old iPhone 6S and 6S Plus in September 2016, and exactly same as the share for the then- year-old iPhone 6 and 6 Plus in September 2015. And in the September 2017 quarter, older models, including iPhone 6S, 6S Plus, and SE, represented 25% of sales. This was higher than the shares for the then-oldest phones in either of the two previous launch quarters. So, rather than waiting for and buying the iPhone 8, it looks like buyers in this quarter either bought existing models, or decided to wait for iPhone X, later in the year.”

“We see evidence of waiting,” continued Lowitz. “iPhone 8 and 8 Plus accounted for only 16% of total sales, compared to a 24% share for the iPhone 6S and 6S Plus two years ago. While it’s a little early to know, it appears that this even lower share relative to that earlier ‘S’ model probably resulted from some buyers delaying a purchase, we think in anticipation of the new iPhone X.”

Apple is set to begin pre-orders of the iPhone X on October 27th for release on November 3rd. There will reportedly be just 2-3 million units available in the distribution channel for launch. 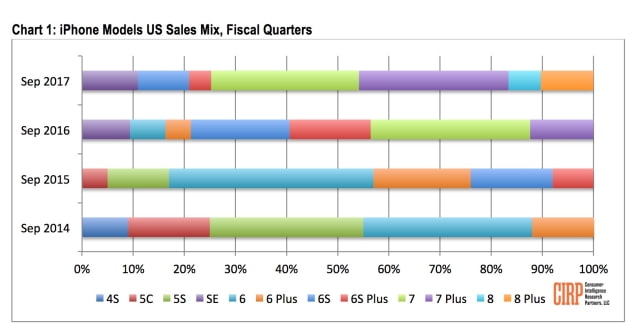 Raas al Ghul - October 25, 2017 at 11:37am
Why is everyone moaning about the design they have change a lot in the internals just the chip alone is massive I think the rapid pace of technological innovation has made us oblivious to important features
Reply · Like · Mark as Spam

Mokong - October 23, 2017 at 10:55pm
This is what you get Apple Inc for being arrogant. Releasing a design that's the same over and over again. IPhone 8 should be named iPhone 6SSS.
Reply · Like · Mark as Spam