The Eurasian Economic Union regulates the sale of electronic products on its soil, and has a commission to give authorizations of sale in Armenia, Belarus, Kazakhstan, Kyrgyzstan as well as in Russia. The EEC has just given Apple the authorization to market new products, and the model numbers are unknown

There are several products that have received authorization including iPhone and iPad samples, something we haven't seen before. The two iPad model numbers listed are A1954 and A1893, both running iOS 11.

It's possible that these new iPads are refreshed versions of the 9.7-inch iPad that Apple debuted last March. That device was announced on March 21st and costs $329. A December report from DigiTimes claimed that Apple was preparing an even lower cost 9.7-inch iPad which would debut in the second quarter of 2018 for $259. 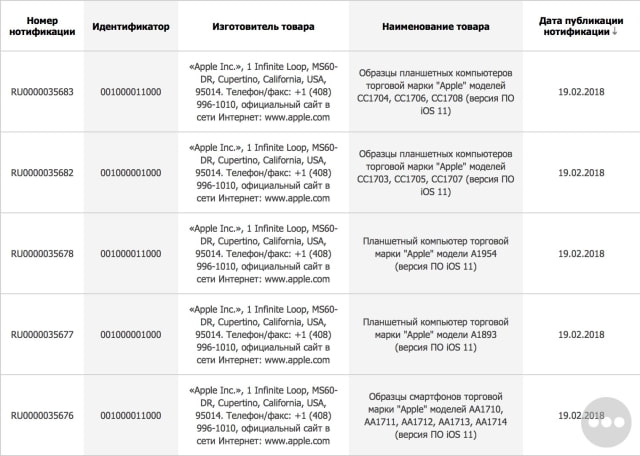 Antoine D. - February 22, 2018 at 2:24pm
I would love for Apple to develop a version of iOS that runs as a Mac OS Lite or something. Anything to better incentivize buying an iPad. Use of a mouse and other peripherals would make this thing even better!
Reply · Like · Mark as Spam

. - February 21, 2018 at 6:12pm
You see that companies that disagree with the connections between the iPad and the computer? It says "tablet computer." The more you know.
Reply · Like · Mark as Spam
Recent