Corroborating a report from KGI Securities analyst Ming-Chi Kuo, WitsView Research Vice President Qiu Yubin said yesterday that a new 13-inch MacBook Air will cost between $799 and $899, that's down from the current base model MacBook Air which costs $999.

Yubin notes that last year's lower priced 9.7-inch iPad helped Apple reverse a decline in iPad sales. The company is expected to release a new inexpensive 9.7-inch iPad in 2018 for around $259.

For the iPhone, Apple is expected to release a 6.1-inch LCD iPhone this fall which should be priced lower than the $1000 iPhone X. Additionally, there have been rumors of a new iPhone SE in May or June; however, those have been disputed.

Finally, it's said that Apple is planning a lower priced HomePod for release in the second half of 2018. The new smart speaker will purportedly cost between $150 and $200. This might help it better compete against Amazon's lineup of Echo devices. 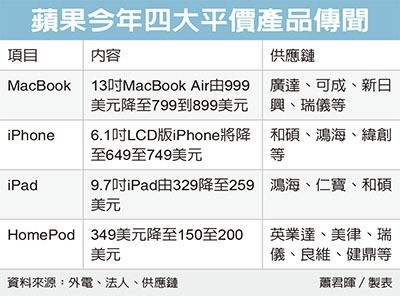 RavenousFallen - March 9, 2018 at 11:32am
Macbook Air is just an iPad with keyboard. Why would they charge a grand for that to begin with? Maybe $500 at most. This is going to a problem for Apple... technology prices are dropping, that's just how efficiency works when demand is met with supply. They can't keep prices artificially high forever. People will just switch to Samsung, Google, etc.
Reply · Like · Mark as Spam