Apple has announced that Scorpion, Drake's new album, has destroyed the Apple Music single-day streaming record. The album pulled in over 170 million streams in its first 24 hours.

The previous record, also held by Drake, was 89.9 million streams of More Life in its first day.

Apple tells The Verge that Scorpion now holds both the US and global streaming records for the service and claims that the single-day streaming total is the largest for any album on any streaming service. 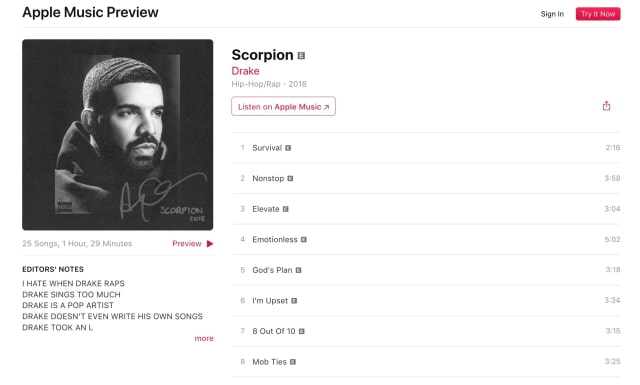 gabe - July 1, 2018 at 7:18pm
So basically there's a lot of people that listen to really dull boring monotoned sh!t music. That's basically what I got out of this article.
Reply · Like · Mark as Spam

lo - July 1, 2018 at 12:52am
That is purely marketing from Apple to boost sale. Annoyed we do not need to know that Apple. Show some new product instead.
Reply · Like · Mark as Spam

ichild - July 1, 2018 at 8:10am
He's known and very popular entertainer but what apple is talking about i have no clue about. Good for Drake if this is the case.
Reply · Like · Mark as Spam
Recent