Apple has announced that iOS 12 adoption has officially reached 50%.

Apple also shared a new chart which shows adoption for devices introduced since September 2014. Of those, 53% are on iOS 12, 40% are on iOS 11, and 7% are on an earlier firmware version. 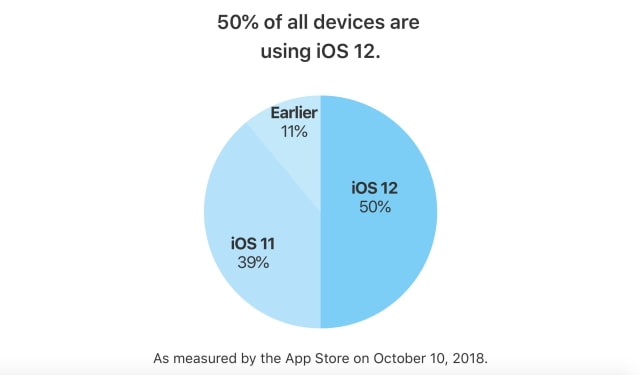 NoGoodNick - October 15, 2018 at 7:23pm
Since 12 has trashed photos on iPhone Xs, and crippled battery life on each of their new phones, in addition to introducing a whole host of other problems, iOS 12 is now Apple’s ‘Windows 10’ in my book. Just like with Windows, I’ve yet to see ANY reason to upgrade which doesn’t limit my usage of my devices!
Reply · Like · Mark as Spam
Recent