The install base of iPhone owners in the U.S. is starting to level off, according to a new report from CIRP.

“The installed base of iPhone owners in the US is leveling off, and grows at a steady but historically slow rate,” said Josh Lowitz, CIRP Partner and Co-Founder. “This should not come as a surprise, as Apple captured a sizable and stable share of a smartphone market that definitely matured. And, 181 million active smartphones users give the company a significant platform for the emerging strategy of selling more to that installed base. This will include promoting two revenue segments that Apple breaks out, Services and Other Products, which Apple just renamed Wearables, Home, and Accessories.”

“Within the installed base, we see 75 million iPhones owners with models that were originally released three years ago or earlier,” said Mike Levin, Partner and Co-Founder of CIRP. “These phones reflect the huge impact of the iPhone 6 and 6 Plus, which at the time represented the first new form factor in four years. This base also includes iPhone 6S and 6S Plus, which have been around for three years. Apple appears to want upgrades to iPhone XR, with a mass-appeal middle size and features that are similar to the newest XS and XS Max, but at the historic flagship price point. We can envision an upgrade cycle similar to the new iPhone 6 and 6 Plus, when more than half of the installed base upgraded within a year.”

Take a look at the chart below for more details. 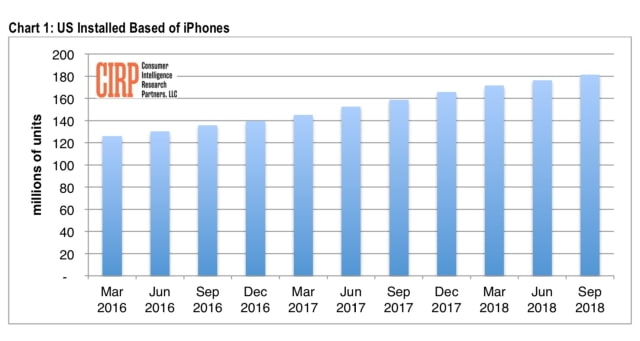