Apple iPhone sales declined an estimated 11.8% year over year in Q4 2018, according to Gartner. Apple stopped report units sold last quarter but if Gartner's numbers are correct, that would be the company's worst quarterly decline since 1Q16.

Global smartphone sales for the quarter are estimated at 408.4 million units, growth of just 0.1% year over year.

“Demand for entry-level and midprice smartphones remained strong across markets, but demand for high-end smartphones continued to slow in the fourth quarter of 2018,” said Anshul Gupta, senior research director at Gartner. “Slowing incremental innovation at the high end, coupled with price increases, deterred replacement decisions for high-end smartphones. This led to a flat-growth market in the fourth quarter of 2018 (see Table 1).” 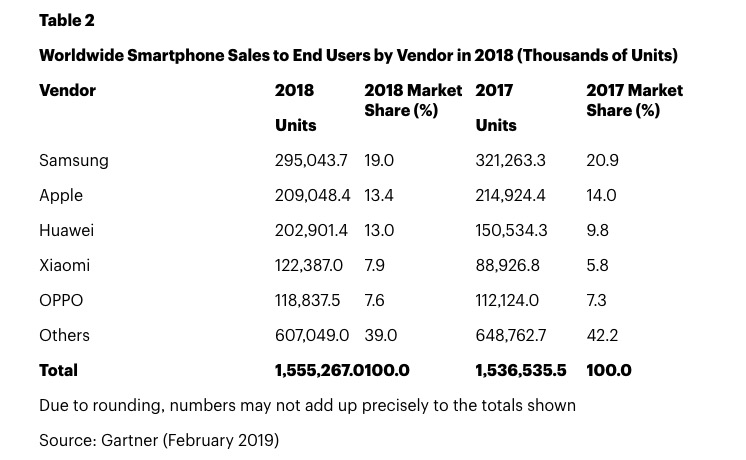 Apple Experienced Biggest Decline Among the Top Five Smartphone Vendors
Sales of Apple iPhones hit 64.5 million units in the fourth quarter of 2018, a decline of 11.8 percent year over year. This double-digit decline made Apple experience the biggest decline in growth for the quarter among the top five global smartphone vendors. Apple saw iPhone demand weaken in most regions, except North America and mature Asia/Pacific. Apple’s sales declined most in Greater China, where its market share dropped to 8.8 percent in the fourth quarter of 2018 from 14.6 percent in the corresponding quarter of 2017. For 2018 as a whole, iPhone sales were down 2.7 percent, to just over 209 million units.

“Apple has to deal not only with buyers delaying upgrades as they wait for more innovative smartphones, but it also continues to face compelling high-price and midprice smartphone alternatives from Chinese vendors. Both these challenges limit Apple’s unit sales growth prospects,” added Mr. Gupta. 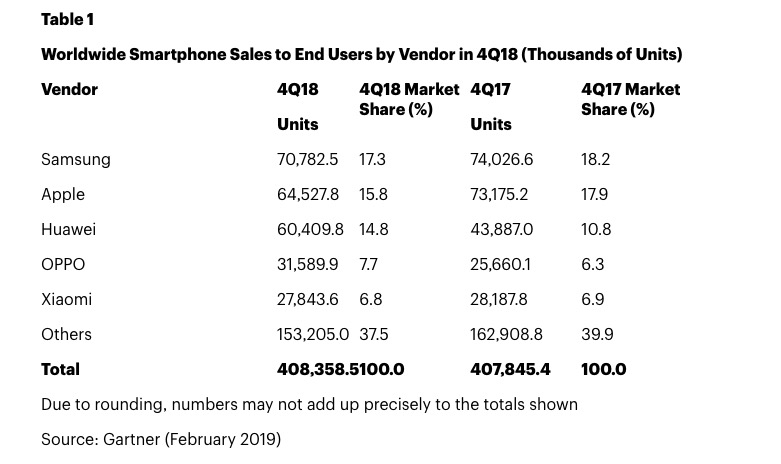