Bose unveiled its next generation wireless Noise Cancelling Headphones 700 today, describing them as the biggest leap forward in headphones since the QuietComfort.

The new Bose 700s introduce a revolutionary new voice interface that redefines mobile communication the way Bose noise cancellation redefined mobile audio. They’re built off the legendary performance of QCs to transform the most demanding environments into private sanctuaries for listening. And they debut new, pioneering technologies to magically transform the same public spaces into private rooms for talking with friends, family, and virtual personal assistants. With their exclusive innovation, the 700s isolate a user’s voice from 360 degrees of unwanted sound. And that lets Bose 700 owners do what’s never been done. Surrounded by competing conversations, rush-hour traffic, and loud subway platforms, they can share their quiet, and not the noise around them — for crystal clear calls to home and work, and unprecedented accuracy from VPAs. Siri for iOS is easily accessible, the Google Assistant and Amazon Alexa are both built-in — and now, Alexa is just a wake word away. 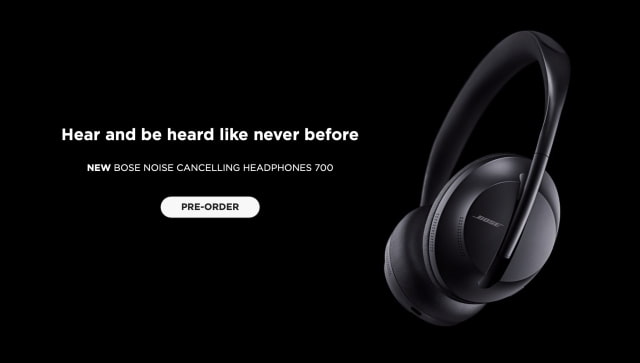 “At its best, technology should make us more human, not more dependent on devices,” said Brian Maguire, category director, Bose headphones. “No one’s bucket list includes more time on a touchscreen, but right now, millions of people are looking down, swiping and typing on a 3x5 display. Pairing our phones and headphones have given us more freedom for calls, and lets us use our personal assistants to get things done. But there are still barriers, and we’ve all experienced them. Our VPA doesn’t understand what we said and dials the wrong number. Or botches our text, so we send it ourselves. Or we’re forced to manually open an app, or hang-up because we’re shouting over a crowd. Noise cancelling headphones have always helped us hear better — but we need to be heard better, too. And no mobile device has solved that problem. No phone, no headphone, and no combination of the two. But the Bose Noise Cancelling 700 changes that. And we can’t wait for people to experience the difference it makes.” 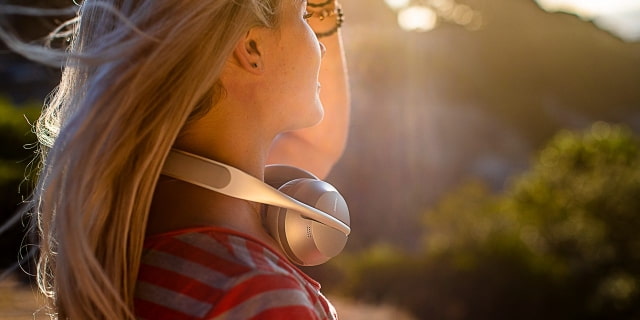 Here's a look at some of the new features....


----
The Revolutionary Bose Voice System
The Bose Noise Cancelling Headphones 700 have been engineered from the ground up as an integrated system, with a new acoustic and electronics package, new digital signal processing, and a new eight microphone system for the most complete, effortless headphone experience ever. Six microphones dramatically cancel noise, so it doesn’t reach your ears. Two of those microphones combine with two others to dramatically improve voice pickup. A beamform-array isolates your speech, suppressing everything else that’s audible. A rejection-array adds a second line of defense, tracking then blocking the most disruptive remaining sound — from a coffee grinder to other dialogue nearby. It all happens in real-time — adapting as you move, turn your head, and your environment changes. It works with any VPA, any phone paired to the 700s, or any phone or phone/headphone combination on the far-end. And it works from anywhere, whether you’re talking to people or machines. On audio and video calls, they’ll hear what you’re saying — not the TV behind you, or the person next to you. For voicemails, your voice is recorded, not theirs. And whether you’re asking for directions or a playlist, dictating a text or email, or need your home alarm turned on or your heat turned off, Siri, the Google Assistant, and Alexa will help you — because now, they can hear you. 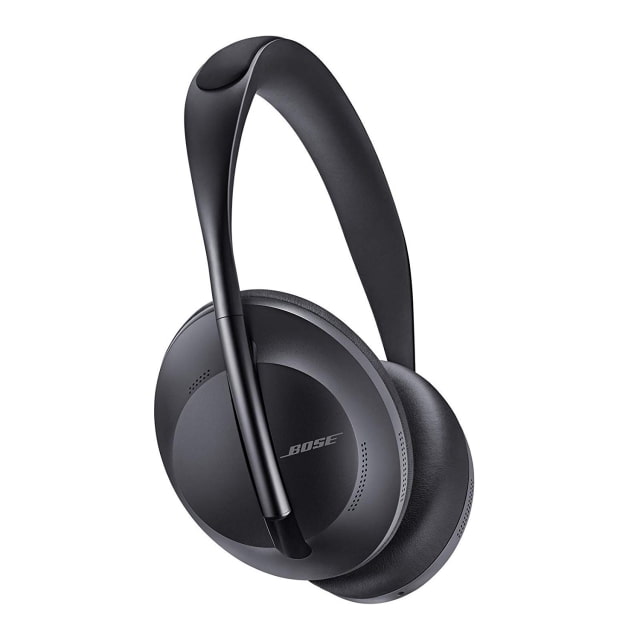 First-Ever Full-Transparency Experience, Conversation Mode — and Brilliant Audio Performance
The Bose 700s use the next-generation Bose noise cancellation for improved noise reduction, and sophisticated electronic circuitry that eliminates the “hiss” regularly heard in other headphones. Combined, they enable the 700’s new adjustable noise cancellation feature, including a full-transparency experience that gives the term “off” an entirely new meaning. While the highest setting delivers the most powerful silence, the lowest lets your surroundings pass-through the earcups fully — so with the flick of a switch, you hear yourself, others, and everything else like you aren’t wearing a headset at all. Conversation Mode lets you gain the same awareness while enjoying content — so you can pause entertainment and noise cancellation simultaneously, chat face-to-face or listen for announcements, and resume where you left off when you’re done.

For music, the Bose Noise Cancelling Headphones 700 sound amazing for the first song, and hours later. Engineered with proprietary active equalization, they avoid boosted bass, vocals, and treble that create listener fatigue over time, opting instead for faithful reproduction: clear, natural, and balanced. 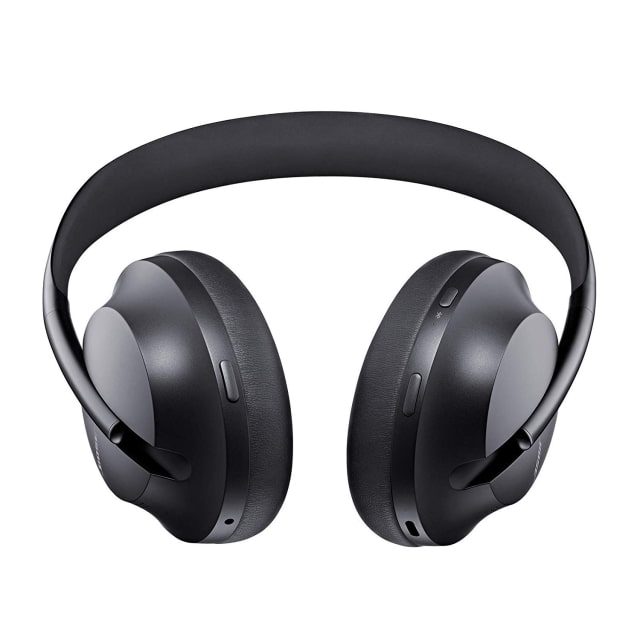 All-Day Comfort and Battery Life, Super-Simple Controls
The Bose Noise Cancelling Headphones 700 were built to last, built to use, and feature gorgeous stainless-steel, premium components, and fewer visible screws, seams, and joints than the industry standard. It distributes weight across the headband for all-day comfort and has up to 20 hours of battery-life for all-day use. For streamlined control, capacitive touch works for common commands, like answering and ending calls, muting audio, changing volume, pausing your music, or skipping tracks. There are three buttons — one for powering on and off, one to access noise cancellation levels, and one for your chosen VPA. The Bose Music app lets you customize and change preferences, update software, access additional features — and features to come. 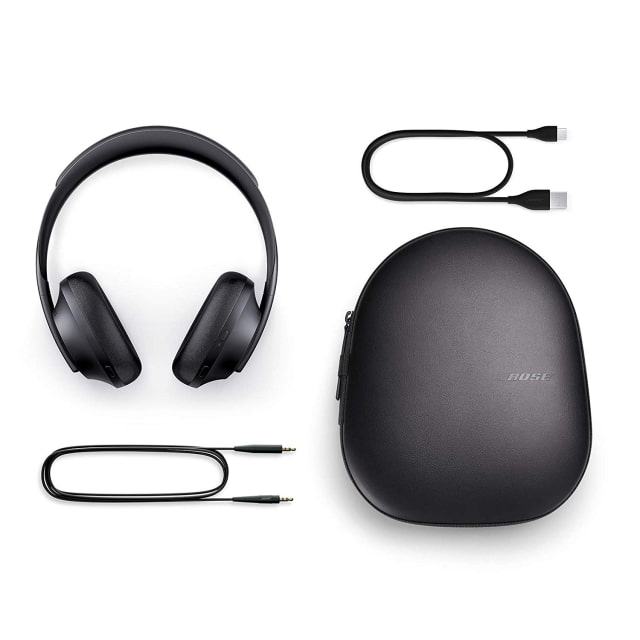 “Alexa” Wake Word Access, Bose AR, and New Feature Preview — Noise-Masking
The Bose Noise Cancelling Headphones 700 work with any native VPA. The Google Assistant and Alexa are already integrated for faster, easier access. An out-of-box software update is also available for wake word access to Alexa. Once downloaded, just say “Alexa” — like you would with a smart-speaker at home. The 700 headphones are also Bose AR-enabled to use with a developing ecosystem of apps that add a layer of audio over the real-world based on where you are, and what you’re facing. And other software features are on the horizon, including noise-masking tracks that add a layer of soothing sounds over the blank-canvas of Bose noise cancellation for intense relaxation and focus.
---

Pricing and Availability
The Noise Cancelling Headphones 700 are available to pre-order today for $399 in black and silver. They will ship June 30th with a thin tapered hardcase.