Apple is planning to open an office in a futuristic tower being built in Vancouver, B.C., Canada, reports Bloomberg.

Cupertino, California-based Apple will join Deloitte LLP and IWG Plc’s Spaces co-working unit as key tenants in 400 West Georgia, a 24-story office building that is owned by Westbank Corp. and Allied Properties REIT, said the people, who asked not to be named because the information isn’t yet public. The firm will take up about two floors, one of the people said.

Westbank describes 400 West Georgia as a 24-storey office tower made up of several clusters of four-storey steel-framed cubes arranged around a central concrete core. The office will feature glass floors overlooking the city, roof terraces under overhanging volumes, vertical gardens framing views of the mountains and the largest rooftop amenity in Vancouver.

"The character of the work space at 400W. Georgia is designed to be open, fluid, flexible, but also diverse. This new, creative work environment elicits collaboration, creativity, and spontaneity. The boxes create natural compartments within a continuous floorplate, allowing offices to be variously partitioned while also staying close to the façade. The floors and ceilings of the cantilevering portions are glazed to visually link the garden, the offices, and the street below. The resulting diversity of spaces is complimented by the diversity of views, whose orientation is not only horizontal, but also vertical."

Project completion is scheduled to complete in the spring of 2020. Deloitte Canada's headquarters will take up 117,000 square feet in the top ten floors while Spaces will rent 120,000 square feet. 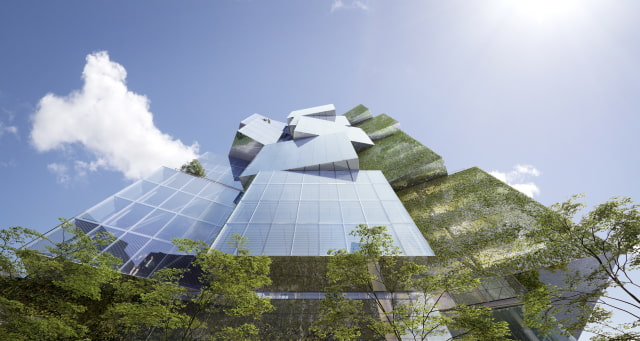