The Federal Trade Commission has officially announced that Facebook will pay a $5 billion fine for violating consumer privacy. Additionally, the company will need to submit to new restrictions and a modified corporate structure that will hold the company accountable for decisions about user privacy.

The FTC found Facebook violated a 2012 order by deceiving users about their ability to control the privacy of their personal information.

“Despite repeated promises to its billions of users worldwide that they could control how their personal information is shared, Facebook undermined consumers’ choices,” said FTC Chairman Joe Simons. “The magnitude of the $5 billion penalty and sweeping conduct relief are unprecedented in the history of the FTC. The relief is designed not only to punish future violations but, more importantly, to change Facebook’s entire privacy culture to decrease the likelihood of continued violations. The Commission takes consumer privacy seriously, and will enforce FTC orders to the fullest extent of the law.”

“The Department of Justice is committed to protecting consumer data privacy and ensuring that social media companies like Facebook do not mislead individuals about the use of their personal information,” said Assistant Attorney General Jody Hunt for the Department of Justice’s Civil Division. “This settlement’s historic penalty and compliance terms will benefit American consumers, and the Department expects Facebook to treat its privacy obligations with the utmost seriousness.”

----
More than 185 million people in the United States and Canada use Facebook on a daily basis. Facebook monetizes user information through targeted advertising, which generated most of the company’s $55.8 billion in revenues in 2018. To encourage users to share information on its platform, Facebook promises users they can control the privacy of their information through Facebook’s privacy settings.

Following a yearlong investigation by the FTC, the Department of Justice will file a complaint on behalf of the Commission alleging that Facebook repeatedly used deceptive disclosures and settings to undermine users’ privacy preferences in violation of its 2012 FTC order. These tactics allowed the company to share users’ personal information with third-party apps that were downloaded by the user’s Facebook “friends.” The FTC alleges that many users were unaware that Facebook was sharing such information, and therefore did not take the steps needed to opt-out of sharing.

In addition, the FTC alleges that Facebook took inadequate steps to deal with apps that it knew were violating its platform policies.
----

The FTC also announced separate law enforcement actions against data analytics company Cambridge Analytica, its former Chief Executive Officer Alexander Nix, and Aleksandr Kogan, an app developer who worked with the company, alleging they used false and deceptive tactics to harvest personal information from millions of Facebook users. Kogan and Nix have agreed to a settlement with the FTC that will restrict how they conduct any business in the future. 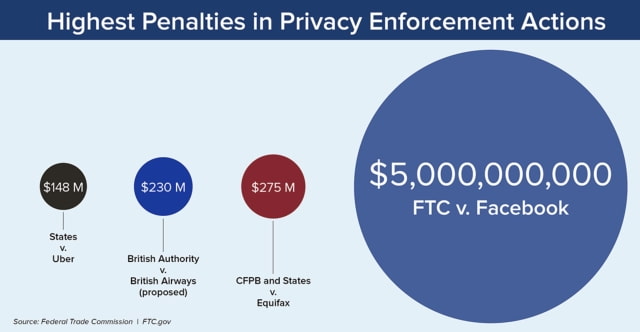 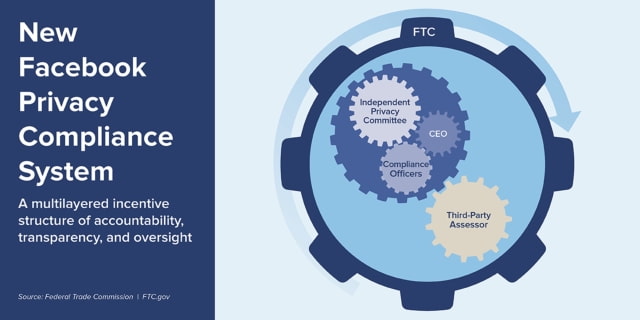