Alphabet has overtaken Apple to become the most cash rich company in the world, reports the Financial Times.

Apple has held the 'king of cash' title for the past decade; however, it's been significantly decreasing its cash hoard for a couple years. The company's net holdings of cash and marketable securities have now been reduced to $102 billion, down from a peak of $163 billion in 2017.

Meanwhile, Alphabet's financial reserves have been climbing. It now has a $117 billion cash pile. The increase comes despite $25 billion in capital spending last year, up from $13 billion in 2017.

Alphabet's preference to keep large quantities of cash on hand has irked some investors who would like to see aggressive buybacks or dividends.

“In general, their attempts to reinvent themselves with their new initiatives aren’t working out,” said Walter Price, a portfolio manager at Allianz Global Investors. “I wish they’d return more cash to shareholders and waste less.”

Alphabet's cash is generated almost entirely by search advertising with help from YouTube and Cloud. 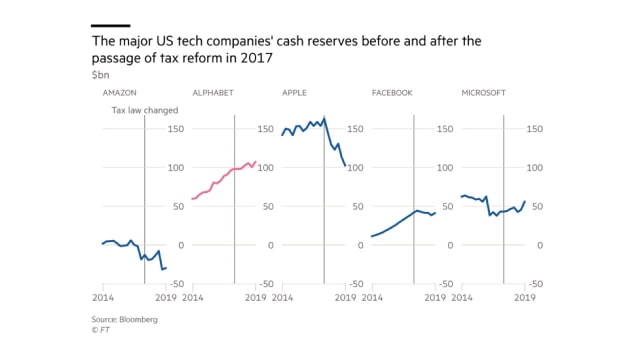