Apple captured 10.1% of the global smartphone market in the second quarter of 2019, according to a new report from Counterpoint Research. That's down from 11.3% market share in same quarter a year ago.

This was the third consecutive quarter of a decline in Apple iPhone shipments. To ramp up sales, Apple implemented price cuts for the iPhone XR in India and China markets. Amid the slowdown in China and likely launch of 5G capable iPhone in 2020, Apple will have to concentrate its efforts on emerging markets. 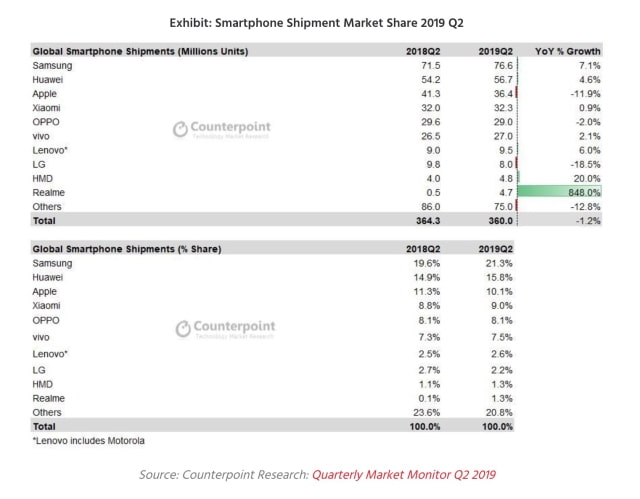 M&M - August 4, 2019 at 3:36pm
I won't buy any new iPhone until i absolutely have to, unless they change from lightning to usb-c, bring back the headphone jack, add more battery, and remove the camera bump. And all of this under 1000$.
Reply · Like · Mark as Spam

NoGoodNick - August 3, 2019 at 2:09am
That’ll continue, until Apple either drops prices to boost sales (rather than jacking prices up with a stupidity tax), or start adding features worth upgrading for. ‘More of the same’ isn’t worth $1,000 a pop.
Reply · Like · Mark as Spam
Recent