Apple's desktop and notebook sales dropped 5.3% year over year in Q4 despite impressive market growth of 4.8%, according to the latest IDC report. Global shipments during the fourth quarter reached nearly 71.8 million units, the highest quarterly shipment volume in four years.

The holiday quarter capped an impressive run for PCs in 2019, where three out of four quarters delivered year-over-year growth. The storyline in the commercial sector for most of the year was around the momentum driven by businesses transitioning PCs over to Windows 10 before the end of support for Windows 7 arrives in January 2020. The continued business push specifically helped the top 3 players – Lenovo, HP, and Dell – to further consolidate their hold on the market with a combined share of just over 65% in 2019 (up from 63% in 2018). In addition, the impact of several other market challenges declined in the quarter. Concerns about CPU availability continued but were helped by the adoption of AMD CPUs while signs of easing trade tensions and other industry drivers helped to increase market uptake for the most important quarter of the year.

"This past year was a wild one in the PC world, which resulted in impressive market growth that ultimately ended seven consecutive years of market contraction," said Ryan Reith, program vice president with IDC's Worldwide Mobile Device Trackers. "The market will still have its challenges ahead, but this year was a clear sign that PC demand is still there despite the continued insurgence of emerging form factors and the demand for mobile computing."

"Despite the positivity surrounding 2019, the next twelve to eighteen months will be challenging for traditional PCs as the majority of Windows 10 upgrades will be in the rearview mirror and lingering concerns around component shortages and trade negotiations get ironed out," said Jitesh Ubrani, research manager for IDC's Worldwide Mobile Device Trackers. "Although new technologies such as 5G and dual- and folding-screen devices along with an uptake in gaming PCs will provide an uplift, these will take some time to coalesce." 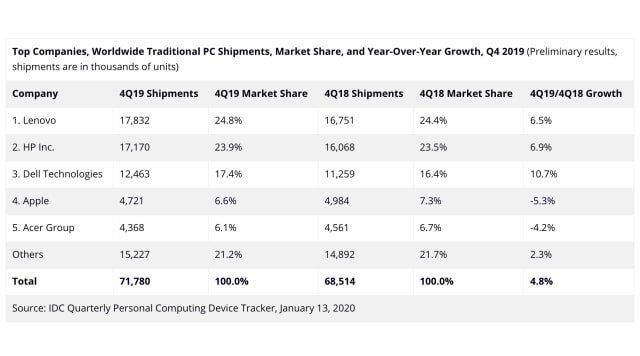 Company Highlights
● Lenovo retained the top position and made further share gains compared to 2018, finishing the year with a market share of 24.3%. Outside of the APeJ region, Lenovo grew in almost every other region and led all OEMs with 8.2% year-over-year growth in 2019.

● Dell Technologies retained the third position in the PC market in 2019 and grew its market share 0.5 points over 2018 reaching 17.5% worldwide. Dell recorded its own record high for shipments during the holiday quarter and led the top OEMs with 10.7% year-over-year growth. The growth was largely thanks to a robust U.S. market mixed with strong commercial activity throughout North America and a few other important markets.

● Apple's Mac volumes saw a decline in 4Q19 with 4.7 million units shipped, down 5.3% year over year. Apple's continued momentum in the iPad and iPhone space have more than offset its challenges with Mac volumes, however. Shipment volumes were also down 2.2% for the full year 2019.

Check out the chart below and hit the link for regional highlights.

simos - January 14, 2020 at 10:33am
First of all, I would like to emphasize that I have been an apple customer since 2010 and I am still. However, since Jobs left, very bad decision are taken regarding the mac section. The macbook pro is not pro anymore. Apple killed its soul and added gimmick that nobody needs. Killed the magsafe, important ports gone, battery indicator, apple logo. In the meantime other companies are innovating and making a real difference in listening to their customers. So Apple if you want to comeback to the rail, you know what to do. I am seriously convinced that my next laptop won't be a macbook pro.
Reply · Like · Mark as Spam
Recent