Apple was the world's number one smartphone vendor in the fourth quarter of 2019, reports Strategy Analytics.

“Global smartphone shipments grew zero percent annually from 376.0 million units in Q4 2018 to 374.5 million in Q4 2019," says Linda Sui, Director at Strategy Analytics. "Worldwide smartphone demand remains mixed for now, with sharp declines in China balanced by strong growth across India and Africa. Full-year smartphone shipments hit 1.41 billion in 2019, dipping 1 percent from 1.43 billion in 2018, due to mild inventory build in the second half of the year. Looking ahead, US trade wars and the China coronavirus scare will be among barriers to growth for smartphones in 2020.”

Neil Mawston, Executive Director at Strategy Analytics, added, “Apple iPhone shipments rose 7 percent annually from 65.9 million units worldwide in Q4 2018 to 70.7 million in Q4 2019. This was Apple’s best growth performance since 2015. Apple’s global smartphone marketshare has lifted from 18 percent to 19 percent in the past year. Apple is recovering, due to cheaper iPhone 11 pricing and healthier demand in Asia and North America. Samsung shipped 68.8 million smartphones worldwide in Q4 2019, dipping 1 percent annually from 69.3 million in Q4 2018. Samsung’s global marketshare stayed flat at 18 percent, the same level as a year ago. Samsung continues to perform relatively well across all price-bands, from the entry level to premium models such as Galaxy Note 10+ 5G. On a full-year basis, Samsung remains number one with 21 percent marketshare in 2019.”

Woody Oh, Director at Strategy Analytics, added, “Huawei shipped 56.0 million smartphones worldwide in Q4 2019, sliding 7 percent annually from 60.5 million in Q4 2018. Huawei’s global marketshare has dipped from 16 percent to 15 percent in the past year. Despite strong 5G sales, Huawei is slowing at home in China and facing tougher competition abroad in key markets like Europe.”

Linda Sui, Director at Strategy Analytics, added, “Xiaomi maintained fourth place, capturing 9 percent global smartphone marketshare in Q4 2019, up strongly from just 7 percent a year ago. Xiaomi had a great quarter in Western Europe and held steady in its biggest market India. Xiaomi is pushing hard into the 5G smartphone category and this will be a solid growth area for the vendor in 2020. OPPO held fifth position with 8 percent global smartphone marketshare during Q4 2019, staying at the same level from a year ago. OPPO is expanding hard into Western Europe, with new models like the Reno 5G, but it remains under persistent pressure from giant Huawei at home in China.”

Take a look at the tables below for more details... 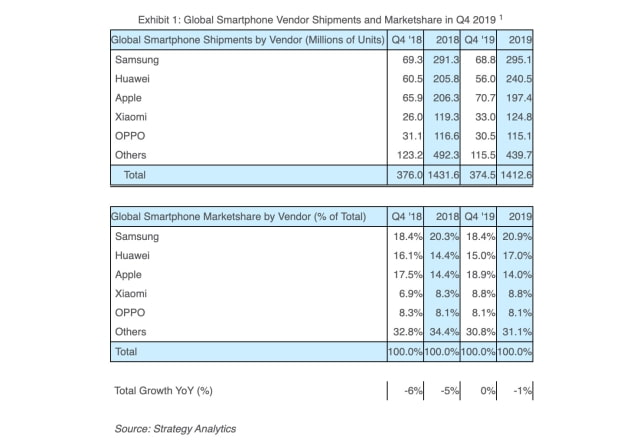