Despite soaring demand for PCs, shipments fell 8% in Q1 2020 to 53.7 million units. This is largely due to production and supply chain issues caused by the coronavirus outbreak, reports Canalys.

Apple was the hardest hit vendor with shipments falling over 20% to 3.2 million units. Lenovo led the market with 12.8 million units, followed by HP at 11.7 million, and Dell at 10.5 million.

“The PC industry has been boosted by the global COVID-19 lockdown, with products flying off the shelves throughout Q1,” said Rushabh Doshi, Research Director at Canalys. “But PC makers started 2020 with a constrained supply of Intel processors, caused by a botched transition to 10nm nodes. This was exacerbated when factories in China were unable to reopen after the Lunar New Year holidays. The slowdown in supply met with accelerated demand, as businesses were suddenly forced to equip a newly remote workforce, placing urgent orders for tens of thousands of PCs. Children, too, needed their own PCs, as schools closed and lessons went online. The urgency of demand from both the consumer and commercial sectors, combined with the shortage of supply, meant device cost was no longer the key consideration. Instead, speed of supply was the most important factor.” 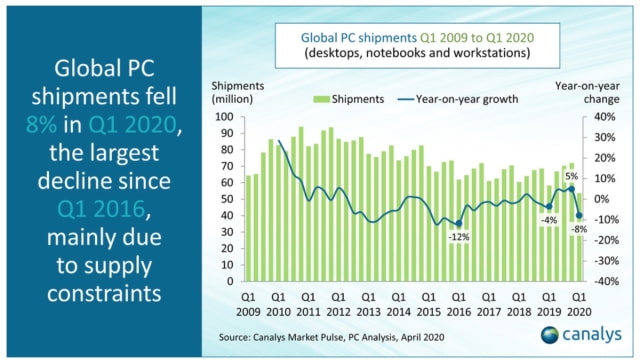 Canalys expects PC vendors to report healthy profits over the next few weeks, with all time high margin percentages. However, the strong demand for PCs is not expected to continue through the year.

Ishan Dutt, Analyst at Canalys, said, “As we move into Q2, the production constraints in China have eased. But the spike in PC demand seen in Q1 is not likely to be sustained and the rest of the year looks less positive. Few businesses will be spending on technology for their offices, while many homes will have been freshly equipped. A global recession has begun – businesses will go bankrupt, with millions newly unemployed. Even governments and large corporations will have to prioritize spending elsewhere. Many parts of the tech industry have benefited from the early part of this extraordinary lockdown period, but we expect to see a significant downturn in demand in Q2 2020. With factories now reopened and virtually up to full speed in China, PC vendors will face a challenge to manage supply chain and production correctly over the next three to six months.” 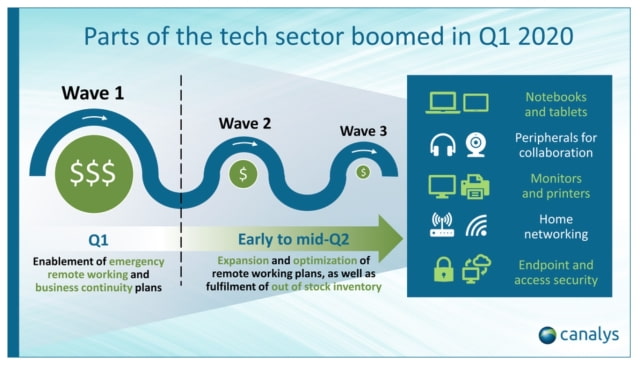 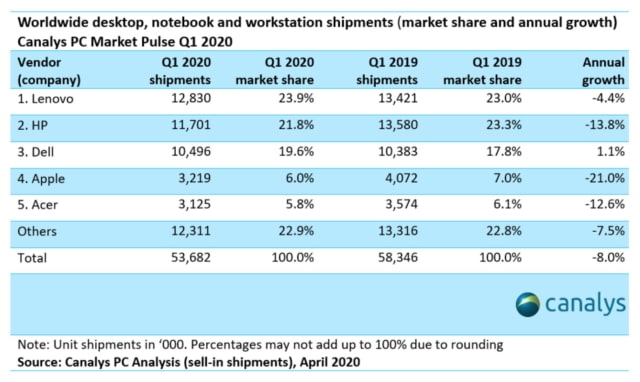